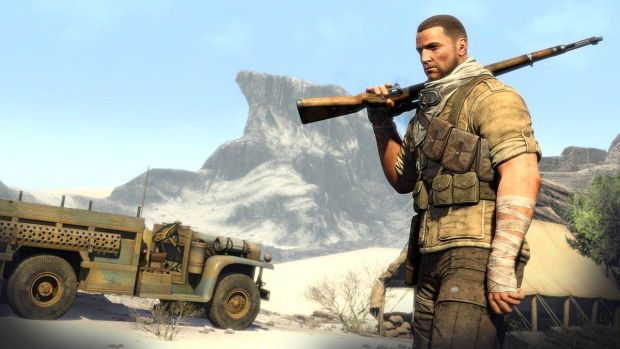 You’ll see my review hit later this evening, but here’s a bit of a preview – Sniper Elite 3 is a whole lot of fun. Today we’ve also got the announcement that the first DLC pack (you get this free if you pre-ordered), entitled “Hunt the Grey Wolf” has been released. What’s in this pack?

The much-anticipated Hunt the Grey Wolf DLC poses the question, did Hitler really die in Berlin? Experience an assassination attempt like no other as you infiltrate a German stronghold, solving the riddle and taking your shot. With an expansive city environment, randomised clues and SEVEN different ways to take down Hitler, no two playthroughs will be the same!

The Hunter Weapons Pack comes complete with a pack of three high power hunting weapons for use in single and multi-player modes including a SVT40 rifle, Trenchgun shotgun and Revolver M1917 pistol.

The Camouflage Weapons Pack has three camouflaged or silenced weapons for use in single and multi-player modes including a Mosin Nagant (camo) rifle, the MP44 (camo) SMG and a high standard HDM (silenced) pistol.

The Allied Outfits Pack is a pack of characters for use in Sniper Elite’s competitive multi-player modes. The characters include Allied Urban Sniper, US Army Rifleman and Indian Division Soldier.

Sniper Elite 3 is available for Xbox One, PlayStation 4, PC, Xbox 360, and PlayStation 3.