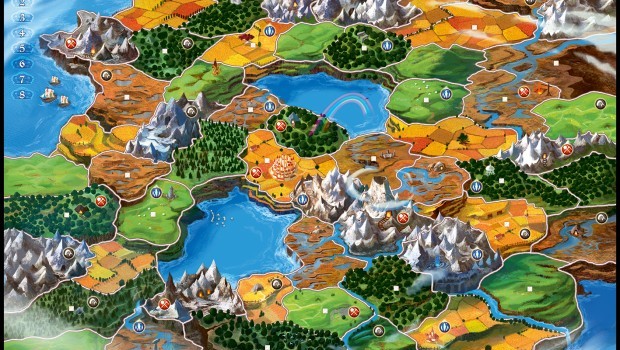 Small World and Small World Underground just got a lot bigger with this new 6-player board expansion. This double-sided map and rules gives players a new way to play Small World and Small World Underground. Teams of two players combine to compete against others, with each team member playing their own Race/Special Power combo and keeping their own Victory coins. But there is a twist… it’s the point total of the LOWEST team member that decides your score against the other teams.

In addition to the double-sided 6-player map – with Small World on one side and Underground on the other – this expansion includes: additional tokens, markers, Victory coins; new 6-player Team rules; 4 new Popular Places and a new Righteous Relic. It requires a copy of Small World and/or Small World Underground. Suggested retail price is $28/€25 and it will be available in retail stores in North America on January 22nd. In Europe it becomes available in early March.

Small World is one of my favorite games, and I’m glad that they are coming out with this so that everyone has a chance to play on it, and allows six players instead of five max.