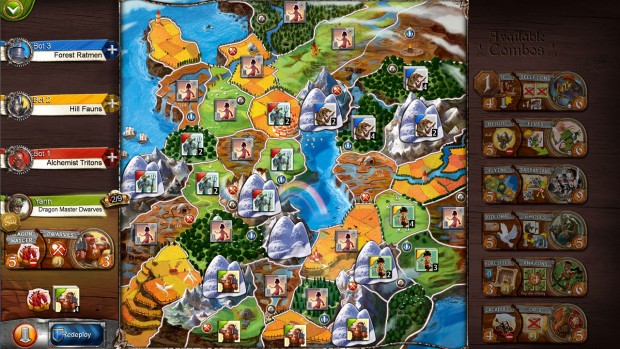 Small World 2 has become one of the most popular board game apps in the App Store, and with good reason.  However, that left Android and PC users unable to play it digitally.  That’s changing today though, because it is being released for the Android operating system and on Steam.

Small World 2, the digital follow­up to the best­selling Days of Wonder digital fantasy board game, is officially expanding from iPad to Steam and Android platforms. The Small World franchise has been breaking new ground since it launched in 2010 as the very first board game for Apple’s iPad. Today, Days of Wonder continues to carve new paths as the first digital board game to allow players to challenge friends to a real­time game across iPad, Android tablets (including Amazon’s Kindle Fire), and PC’s via both Steam and Days of Wonder Online.

To date, the Small World franchise has sold more than 750,000 copies worldwide across its physical and digital versions, with thousands more games played online every day. Players can even start a game on one platform, and continue on another.

“Just like we feel it’s important to offer gamers a chance to play great games in both physical and digital forms, we feel strongly that Small World should be playable on PC’s and Mobile devices, not just one or the other.” said Eric Hautemont, CEO of Days of Wonder.

If you enjoy Risk or other area-control games, then be sure to check out the Small World 2 app.  I find it to be a fast game with a lot of replayability due to the different races and special abilities.  The Small World 2 app also includes the Dames, Cursed!, and Be Not Afraid expansions as in-app purchases, and if one person playing has purchased them, then they are available for that game.  Being able to play against others on different platforms is great as well, which should give you plenty of opponents to play against online.  If you don’t have an iPad, then go to Steam or your Android tablet and take a look at what you have been missing.