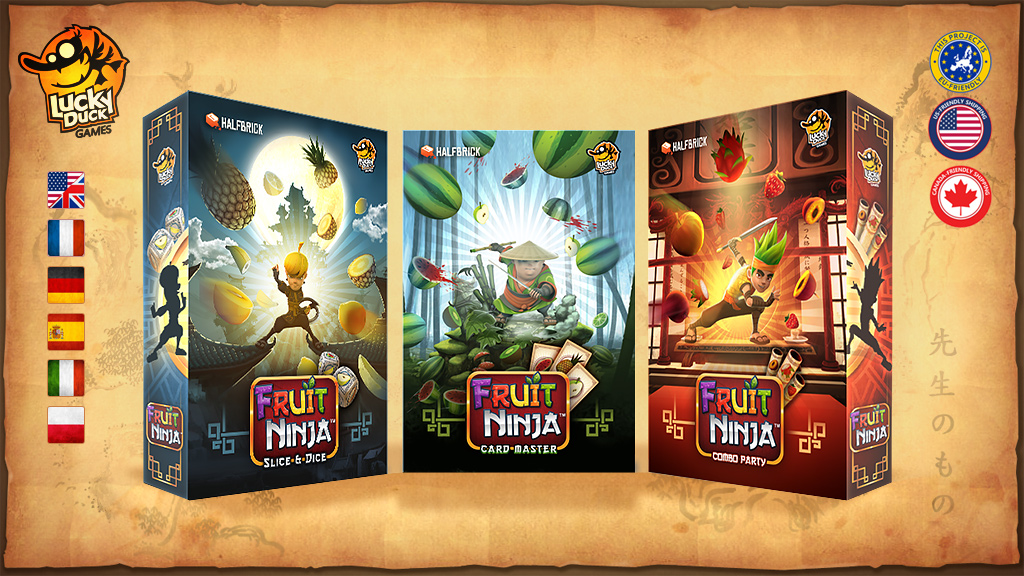 The Fruit Ninja series became a huge hit on mobile platforms.  Slicing and dicing different food in the air while avoiding bombs became simple but addictive fun.  Now Lucky Duck Games is bringing a series of three games featuring the flying fruit by funding it on Kickstarter.

Lucky Duck Games, a board game publisher with a mission to transform popular online licenses into amazing tabletop experiences, and Halfbrick Studios, developer and publisher of Fruit Ninja, announced today that the Kickstarter for the Fruit Ninja tabletop game series, is now live. Lucky Duck Games is hoping to raise $10,000, which will go directly towards the production and manufacturing costs of the games. More information about the three games can be found on their Kickstarter campaign page below.

The Fruit Ninja Tabletop Game Series consists of three wildly entertaining, family-friendly tabletop games. The creators wanted to make sure that the final products had to be unique in design, fun, accessible for any user, and quick to play. In order to create the dream Fruit Ninja game set, Lucky Duck Games collaborated with 50 of the most creative game designers in the board game industry. After reviewing 20 different prototypes, they selected three of the best games that were submitted:

“The support we have received from Halfbrick has been amazing and now we’re incredibly excited to be launching this Kickstarter campaign and get the last bit of support from our community to bring the unparalleled fun of the Fruit Ninja digital experience to a physical form shared at home with friends and family.” says Lucky Duck Founder, Vincent Vergonjeanne.

With more than one billion downloads, Fruit Ninja‘s core value of accessibility and a positive sense of humor is the perfect match for a series of fun and family-gathering tabletop games. Halfbrick Studios, the creator of the mobile game, has been incredibly helpful in supporting Lucky Duck Games to bring this ambitious project to life.

In exchange for pledging to the project, backers can gain access to three levels of rewards:

The Fruit Ninja Tabletop Game Series is scheduled to release in August of 2018.

I’m glad to see that they have three different pledge levels, and they’ve already reached their funding goal with three weeks left to go.  Get in on the action now while you can.