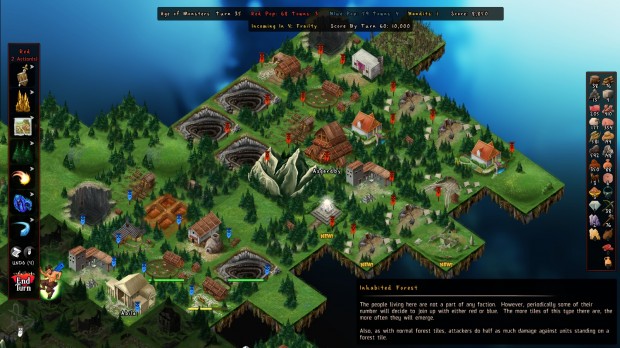 If there is one single phrase that perfectly encapsulates the concept of Arcen Games’ Skyward Collapse, it is this: You can lead a horse to water, but you can’t make him drink.  Yet that is what Skyward Collapse tasks you with.  By hook or by crook you’ll have to convince the minions running around the world you govern to wage war on one another without letting one side dominate the other.

[singlepic id=12939 w=320 h=240 float=left]You are the Creator.  You preside over an ever-expanding landmass hanging in the sky that’s been colonized by two factions: the Norse and the Greeks. Your job is to strike a balance between the two factions, but there’s a catch: you can’t interact with any human unit directly.  You have to use your heavenly powers to induce the behavior you want.  Don’t want Norse warriors attacking a Greek town?  Build an impassable mountain range between them.  Are the Greeks becoming too powerful?  Give the Norse access to magical weapons, or spawn a mythological Valkyrie to drive the Greeks back.  These actions generally feel very powerful in the early rounds of the game, but as the rounds creep by you’ll have to resort to larger, more dramatic events to shape the world.

Though the game’s description says your job is to strike a balance between the two factions, I found that wasn’t quite the case.  You are awarded points for events in the game–placing a mythological creature, having one side destroy a bandit keep–and if you fail to reach an arbitrary threshold before a given turn, you lose.  The best way to generate points is to go to war, so be sure to keep those towns pumping out military units.  Each game is divided into three rounds.  First comes the Age of Man.  Second comes the Age of Monsters, and lastly comes the Age of Gods.  The trouble is that the earliest rounds are much harder than the later ones.  Getting out of the Age of Man alive can be a real challenge, because it will take you nearly half of the time you’re allotted to establish an economy that can support any kind of war.  Once that’s done, though, the later rounds are a breeze. The biggest challenge is keeping track of the battle as towards the end of the game the map can get quite large, and the sheer number of units on screen becomes nigh-unmanageable.[singlepic id=12937 w=320 h=240 float=right]

Once I figured out you could generate a lot of points by sparking massive wars, I found a specific combo of powers that populated the entire map with soldiers in the space of a few turns.  It was which is great for generating points, but completely unhinged any chance I had of keeping track of  the war’s progress.  As if that wasn’t bad enough,  unit actions have their own turn, meaning that you might spend two or three minutes watching the units move around the screen before you’re able to play the game again. Thankfully you can speed this up or skip it altogether, but you’ll miss a lot of that turn’s developments if you do, leaving you ill-informed to what actions you should take.

The issue with unit management is that there’s not much color differentiation between the two warring factions.  Instead of granting each a single, distinctive major color, units are rendered in a wide variety of tones, and tagged with a miniscule flag. The result is that only at the tightest zoom can you readily distinguish between factions.  The graphics themselves aren’t bad–they’re bright, colorful, and have enough variety that you never feel like you’re seeing the same maps over and over again–but they don’t do a good enough job giving tactical information to the player.

Skyward Collapse’s audio was pretty underwhelming overall but the music is what drove me crazy.  The soundtrack lacks identity, swerving wildly between genres without establishing any sense of tone or consistency.  Driving techno backbeats might be replaced with light piano rock only to be replaced again with folksy guitar strumming.  None of the music is decidedly horrible, but the genre changes are really jarring.

[singlepic id=12940 w=320 h=240 float=left]Skyward Collapse is based on a unique premise, but in execution is a lot less fun than you’d think. It’s inoffensive, but not particularly inspiring, either. I’d never suggest anybody pay full price for it, but if you pick it up in an indie bundle of some kind down the road, you might as well give it a shot.  If nothing else, it’s an interesting failure.