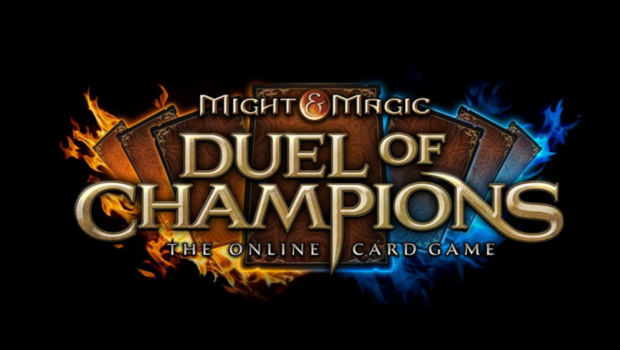 This month has seen the North American launch of Might & Magic: Duel of Champions, a free-to-play tabletop card game for the PC and iOS devices. I’ve been a fan of Might and Magic ever since Might and Magic 2, while card games have been an interest of mine since at least the earlier editions of Magic: The Gathering  – mixing them up seems like a promising combo, wouldn’t it? Well, in this case, intuition pays off. My time with Duel of Champions has revealed an extremely TCG with some slick tournament offers, and a gameplay style that truly does reach that triple-play goal of “easy to learn, hard to master, fun to play”. Add in the fact that your deck status is shared whether you play on PC or iPad and you’ve got a serious contender to the Magic: the Gathering franchise, at least where computer play is concerned.

Let’s talk gameplay fundamentals. Might and Magic: Duel of Champions plays like a loosely translated version of the Heroes of Might and Magic series. You and your opponent have four ‘lanes’ to place cards on, each consisting of a front line slot for a melee card, and a back row slot for ranged creatures. If there are no opposing forces in the enemy lane, creatures can attack the opposing player directly – as usual, reducing the enemy player to 0 health wins you the game. You can also move your creatures from one row to another, in case you need to reinforce your lane against a particularly nasty opposition, and creature attacks are as a result limited to their particular lane. On top of all this you have spells and fortune cards you can play from your hand (think sorceries, enchantments, and instants from Magic: The Gathering), and two ‘event’ cards that change each turn – one selected randomly from each of your and your opponent’s decks, which generally allow for both players to gain a temporary boon or curse if points are spent to activate it.

[singlepic id=11627 w=320 h=240 float= left]Man, writing about the basic mechanics of any TCG just makes the whole thing sound unbearably dry, doesn’t it? Well, don’t be fooled: this is a very fun game. Graphically, it’s a treat – every card is filled with extremely well-drawn eye candy, each of which has some nice flavor text you can read while browsing your collection. There are 6 factions to play around with, 7 schools of magic, and a whole lot of cards to chase. There’s a very easy-to-understand tutorial to start you off, a campaign mode, achievements that unlock additional cards and game currency, practice mode, and online challenges and tournaments. The key takeaway point here is that if you end up liking Duel of Champions, you’re not going to be hurting for gameplay opportunity here – whether you want to chase after achievements in the single player campaign, or try to earn currency, rewards and reputation with the online endeavors. It’s common nowadays, but it’s still nice to note that the game has an online ranking system that helps to determine who you get matched against online – anything that makes the fight a little more fair, you know?

[singlepic id=11629 w=320 h=240 float= right]While Might and Magic: Duel of Champions is a free-to-play game, there’s still the cash shop aspect to take account of. Now, there’s always going be some advantage given to the player who’s willing to lay out money for a game like this – they’ll have more cards, more cards means more options (and more rare, powerful cards), and that means a better deck. I don’t begrudge Ubisoft this – they have to make money somehow – but if there was no real opportunity to build your deck other than through straight-up purchases, the whole ‘free to play’ thing would be little more than a joke. Thankfully, the game allows you to pick up currency – gold and seals – in a variety of ways. The easiest way at first is to fight your way through the single player campaign and try to complete as many achievements as you can, which will reward you with various combinations of currency and free booster packs. The currency can be spent in the in-game store to pick up booster packs, decks, tournament tickets, or boosts to experience or gold gain. Finally, you can engage in ranked duels online for the chance to get gold, exp or improve your leaderboard ranking.

[singlepic id=11628 w=320 h=240 float= left]Between the gold and the seals, it’s the seals that are the ‘true’ cash shop currency for this game. These are used to buy the most desirable booster packs, the experience and gold boosts, and perhaps most importantly, the tournament tickets. While you start off with a few tickets gratis, those of you who are truly interested in playing this game and getting into the competitive angle are going to probably want to save your seals up to enter these competitions – not only do they allow you to duke it out in a more organized setting to try and come out on top, but there are tiered gold rewards that scale according to your performance. Remember, however, that while you may win some prizes, these tickets cost seals to acquire – if you like the game enough to keep playing tournaments, chances are you’re eventually going to need to spend some real cash in order to get the seals to purchase more tickets. On the other hand, if you’re playing that much then you clearly like the game, so what’s the harm, right?

Right now it looks like there’s a good, solid community for Might and Magic: Duel of Champions, and as far as collectible card games go, it can easily be said to give its nearest competition (Magic: The Gathering: Duels of the Planeswalkers 2013) a run for its money on the iPad. If you’ve been looking for a new card-based addiction for your iPad or PC, this is your best bet at the moment. Check it out either in the app store or – for you PC users – hit the main website to download the client.