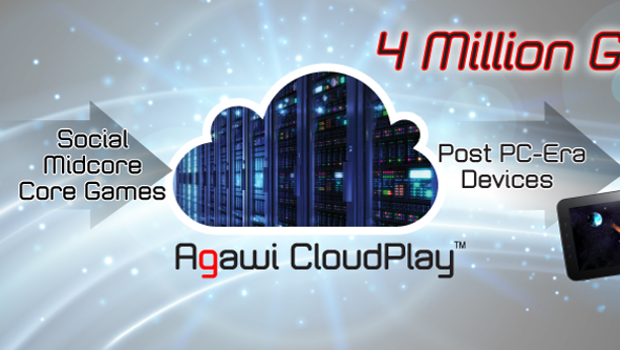 Indie game development is currently in something of a golden age – the rise of the direct download market mixed with the rise of portable platforms has opened up a whole lot of doors that were until recently far more niche. At the same time, Cloud-based services are becoming more and more popular – from Dropbox and Google Drive to Cloud virus scanners and more. Naturally it was only a matter of time until these two trends managed to see some overlap… and that’s where Agawi Cloudplay comes in. I had a chance to speak with Peter Relan, the head of Agawi, about just what his company’s software has to offer both gamers generally, and indie devs in particular.

Now, if the combination of gaming and cloud integration sounds familiar to you, well, good memory – OnLive already tread ground similar to this. The difference with Agawi Cloudplay largely comes on its emphasis on indie gaming titles, whereas OnLive was more focused on mainstream, big-budget games. That’s not just a distinction which matters to end-users; it’s also a hook for a different class of developers. The ability to add on a new revenue stream for an indie game by porting to another platform, while not needing to deal with the usual reprogramming issues that go with a port, is probably the most attention grabbing aspect for developers. After all, even if you’ve coded your app up with a multiplatform library, many times you still have to pay attention to some particularities of the platforms you’re porting to. With Agawi Cloudplay, that’s not an issue – it streams to the end user however it was originally coded, on the original platform it was coded for. It’s that lure of profit along with a lack of effort on the developer’s part that’s going to serve as the real source of interest for indie devs.

Agawi Cloudplay also differs from OnLive in its platform focus. The big push here is with what Relan calls ‘Post-PC Era devices’ – tablets and phones, primarily, rather than traditional desktop and laptop PCs. Naturally this means Agawi is targeting all of the major tablet and phone platform options for deployment, and users who use the service on more than one platform will be able to carry over their saves without a hassle – after all, it’s all on the cloud. The model here is a rental system rather than a Steam-style ‘purchase once, play forever’ approach – which did lead me to wonder how saves would be handled. What if I rent a game for one week, and then my rental period runs out and I rent it again in a month? Can I still expect to have access to my save? The details here weren’t set in stone, though Peter did suggest that holding saves on the cloud was definitely a consideration they were paying attention to.

The plans for the service go beyond portable platforms as well – including deployment to cable operators. Now, I didn’t get any hands-on time with the service so I can’t attest to the quality of gameplay or streaming – something that plagued OnLive early into its life – but as a guy who loves all things indie related, Agawi strikes me as a service worth checking out. For you developers out there who may want to learn more about the Agawi Cloudplay, be sure to check out their website for some additional information.