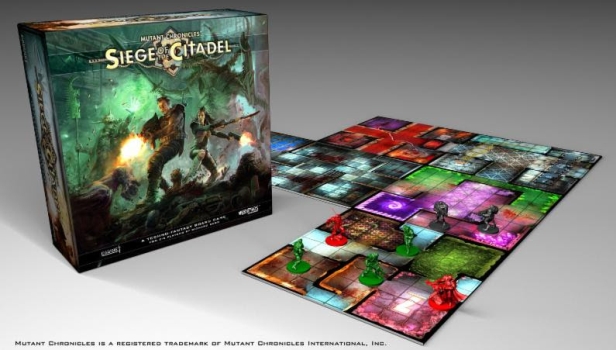 Modiphius Entertainment had a very successful Kickstarter with the Mutant Chronicles core books.  They have now just announced that they will be expanding that franchise with a new game going up on Kickstarter in the summer with Siege of the Citadel.

This is Capitol Radio One from Volksburg on Venus. The battle is on! At four o’clock this morning Cardinal Durand gave the order! “Tear down the castle of Alakhai! The liberation of Venus starts now!”

Cabinet Entertainment & Modiphius Entertainment have unveiled Stefan Kopinski’s cover for the epic Siege of the Citadel Board Game which triumphantly returns with a major Kickstarter this summer.

Can you hear me? Capitol Radio One. Live from the batteries. I can hardly hear myself think. Ten thousand guns sending our regards to Alakhai’s hordes!

New sculpts, New Double-sided Tiles, New Rules and New Creatures will bring the Siege of the Citadel core box screaming to life. This 2nd edition of the iconic techno fantasy board game returns with original designer Richard Borg (Memoir 44) once again on the frontline, with Kevin Wilson (Descent), and Eric Lang (Blood Rage) bringing up the troops.

Yes, we sure have a mother of a battle to talk about today and Capital Radio will be right there and tell you all about it. Hear more after this message.

“Those shells where built by Bauhaus! And they sure strike where it hurts!”

With the original game engine rebuilt and growling to life, Siege of the Citadel has everything you need to recreate the famous battles of Alakhai’s citadel – just imagine you can be Doomtroopers like Sean Gallagher or Big Bob! Get a FREE Plasma Carbine and armoured shoulder pads with every box whilst stocks last*

*Offer only valid with sales from Luna City’s own Brotherhood store!

Sean D’Armatto, is out among our troops to give you listeners the latest from the battle. Now that it has begun Sean, how do the troops feel? Yes folks just imagine, one million of our troops just dying to give Alakhai hell!

Stefan Kopinski’s propaganda art will be seen by citizens across the colonies and celebrates Mitch Hunter and Valerie Duval’s greatest battle. Rumour has it he’s painted a stunning tribute to the Brotherhood’s stand in the great halls against the Behemoths of the Dark Legion!

Capitol Radio One, the war radio, live from the suburbs of Volksburg. An outwork of
Alakhai’s castle known as “Bald Hill” fell to six Imperial divisions this morning after a night of furious hand to hand combat. Not a single heretic escaped!

The terrifying insides of Alakhai’s mind bending citadel are brought starkly to light from the memories of Doomtrooper Henning Ludvigsen who single-handedly mapped the interior of the Citadel, often fighting off Necromutants with the stab of his mighty pen!

Under completely pain-free treatment from the Cardinal’s own Inquisitors, trooper Ludvigsen has been able to summon the will to paint the missing 8 forbidden halls that didn’t make our previous release. Yes they maybe drawn in blood but these maps will see you through! Just don’t speak the name Alakh….

Renowned Bauhaus novelist Anders Fager has been following the assault, writing up some of the most intense moments as our brave heroes lead the assault. Meanwhile, the heroes and monstrous forces of the Dark Legion have been captured for all eternity by Luna City’s greatest sculptors including Gael Gaumon, Valerio Terranova and others, led by impresarios Paolo Parente and Prodos Games, who together have the eye of the Cardinal himself on their great work!

Get ready to face the devastating Praetorian Stalker, which now joins the existing forces of the Citadel’s Dark Legion including Undead Legionnaires, Necromutants, Centurions, Razides, and the terrifying Nepharite and Ezoghoul!

Sean D’Armatto! Capital Radio! We have Ezoghouls on the loose! At the west batteries. It’s a counterattack!

Sean? Sean, are you there? Sean? Tell us! What is happening?

Sean cannot come to the radio right now. Sean is busy transforming. He would very much like you all to join him. Come on and transform…

New rules let you master the Citadel’s terrible machinery, the Dark Legion gain defensive and destructible terrain, whilst terrifying story based mission features and other exciting new developments will push you to the limit of your humanity!*

*Cabinet and Modiphius cannot guarantee immunity to Dark Legion corruption from over exposure to Siege of the Citadel.

Watch the doomtroopers file past! Thousands and thousands of them lined up charging towards the Throne room and….yes I can see him! Cardinal Durand is there with Capitals’ three time award-winning hero Mitch Hunter and Bauhaus’ Valerie Duval at his side – feeding the Dark Legion one bullet at a time!

Step up and join the Doom Troopers Now. www.modiphius.com/siege-of-the-citadel – The Cardinal Needs You!

“Feeding the Dark Legion, one bullet at a time!”

I’m glad to see a non-fantasy setting dungeon crawler like this.  The box art looks great, and Richard Borg, Kevin Wilson, and Eric Lang are all quality designers.  We’ll definitely let you know when this one hits Kickstarter.