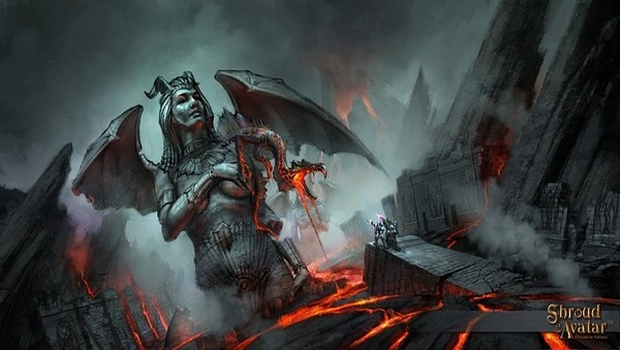 As a Dragon I can say that today is a special day –  I never thought I would see another title from the Ultima series.    While that is technically true, we do have its spiritual successor from Richard Garriott’s team at Portalarium,  – Shroud of the Avatar.   Looking far better than a game should at just nine months into development, this release will give players a chance to try out the equipment system, housing and home decoration, NPS interaction and much more.  I’ll turn it over to the team for all the details before we check out some of the screenshots showing the game in action:

Portalarium, the Austin-based development studio headed by acclaimed game designer Richard Garriott, announced today the first release of Garriott’s Shroud of the Avatar™ fantasy role-playing game. Backers of the crowd funded project today can log in to their accounts, download the client, create a character and begin to wander and explore the streets of Owl’s Head, the game’s first town open for business. The release comes only nine months since the project was announced by Portalarium in early March.

“We are pleased with our progress,” said Garriott, “and we are excited to show our fans what we’ve created in the short amount of time we’ve been working on the game. It’s still very early in development, and this is not your traditional development model. Since the game is crowd funded and crowd sourced, we feel it’s important to give our community an early glimpse of the game’s progress…earlier than what you’d normally see in traditional game development. But this is important because player feedback at this stage will be utilized in helping us understand any changes we need to make and to possibly reaffirm that we are on the right track.”

In Release 1, players will also be able to converse with non-player characters (NPCs) and try out the game’s dialog system. Players will also be able to equip their avatars with different clothing, armor and weapons and they’ll be able to select a house from the entire list of player houses, even the vast Lord of the Manor estate. There will also be chests of furniture and decorations all over Owl’s Head for players to pick up and outfit their newly established homes. This early release is single player online only. In later releases, the Shroud of the Avatar team will roll out multiplayer online modes.

“These early systems are ready for players to try out and test for us,” said Executive Producer Starr Long. “We hope the community understands how critical they are to helping us make Shroud of the Avatar the game that we all want it to be. Throughout 2014, we’ll be rolling out even more features and systems on a monthly basis for players to try out including crafting, combat, questing, multiplayer and of course many other towns, dungeons and lands to explore.”

If you are a backer you should have gotten your instructions on how to download the client and log in.   Shroud of the Avatar is a crowd funded and crowd sourced RPG built in the Unity engine set to release on in late 2014.  If you’d like to become a backer and try it out for yourself, you can hit up the official site at http://www.ShroudoftheAvatar.com