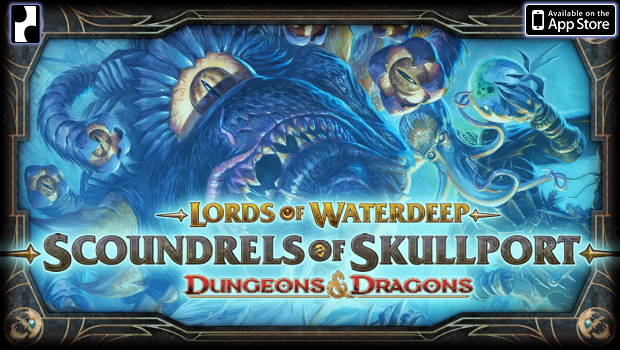 Playdek, a leading mobile video games publisher, today announced that Scoundrels of Skullport, an in-app expansion for its award-winning Lords of Waterdeep game for iPhone, iPad and iPod touch, has arrived on the App Store. Set in the Dungeons & Dragons Forgotten Realms universe from Wizards of the Coast, the Skullport Expansion takes players into the heart of Undermountain where new dangers await.

Skullport — also known as the Port of Shadows – is nestled in the heart of Undermountain. A haven for nefarious crimes, underhanded deals and back-alley murders, Skullport is a hive of evil beneath the City of Splendors.

The expansion gives players the Rapid Expansion Promo Card to garner more buildings faster and stop opponents from doing the same, and a new resource module – Corruption.Unlike other resource modules, having Corruption penalizes a player at the end of the game. Players must strike a balance between greed and the potential harm of Corruption.

“We are pleased to deliver the Scoundrels of Skullport expansion so quickly to our fans who are hungry for more Lords of Waterdeep,” said Joel Goodman, CEO, Playdek. “Playdek’s partnership with Wizards of the Coast continues to bring these great hot properties to mobile platforms for all levels of players to experience.”

The game supports up to six players (up from five) in pass-and-play and asynchronous online multiplayer, as well as player-versus-computer, giving even more players the chance to engage in D&D action whenever they want.

To see images, technical requirements and more information, please visitplaydekgames.com. Scoundrels of Skullport is available for $2.99 on the App Store.  To celebrate the arrival of the expansion, theUndermountain expansion is on sale for one week for $.99.

If you enjoy the base game, then I highly recommend getting both of these expansions, especially since Undermountain is only a dollar.  Playdek does a great job with their translations, and these are no exception.  If you aren’t sure, be sure to check out my review of the original game.