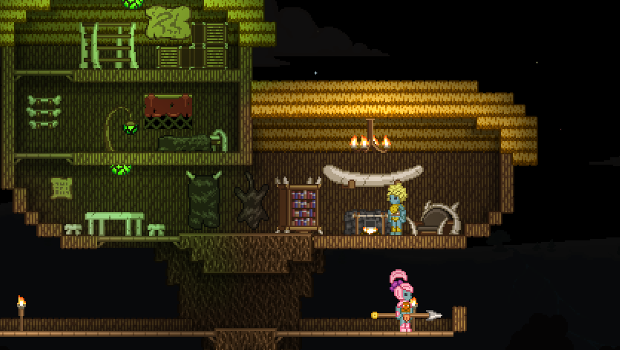 For those of you who are always looking for more games that let you explore and build in the vein of Minecraft and Terraria, listen up. Indie developed Starbound – a game which looks and sounds a lot like Terraria but with a sci-fi twist – is now accepting pre-orders. Actually the real news here is Starbound’s existence, because this is a title which looks extremely promising: procedurally generated planets that can be visited and settled, boasting attention to detail such that every part of the world can be examined for information, all with that good old 16-bit style graphical presentation. The beta will be released later this year, so this is a game which still has a ways to go yet, but the initial concept and presentation sure looks promising. The pre-orders are also being tabulated in Kickstarter style, and as of this writing the team has just met its 500k USD stretch goal – so they certainly have the attention and faith of the public on this one.

All preorders for Starbound are granted beta access, and the cheapest option starts at 15$ for the game, steam key, soundtrack and beta access (With a 25% discount for a 4-pack), ranging up to a $2000 package which gets you an in-game statue and some other enticements. For those of you curious about the game, the FAQ is worth checking out – and really, if Minecraft or Terraria caught your attention for more than a day, you really should keep a close eye on this one.