Update #2: 2Awesome Studios has rallied and put up a second campaign for Dimension Drive, which you can find here. They are offering an Early Bird deal for backers and have told us, “We have decided to fight again one more time and relaunch our campaign.” We’re in further contact with the team there and hope to bring you more on their second campaign. 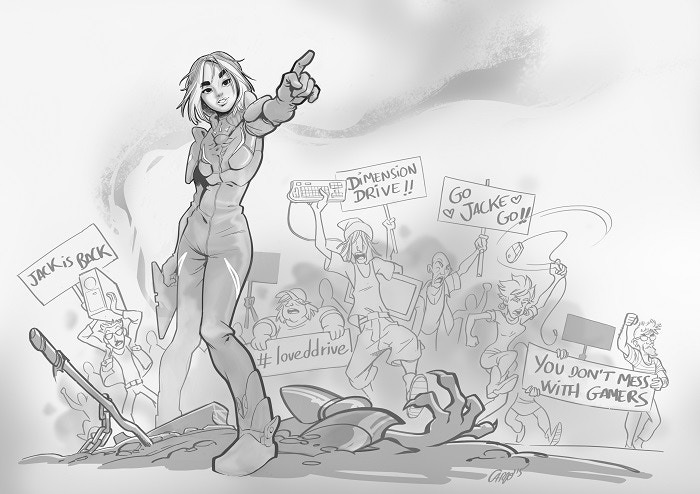 Update #1: We have received an official statement from Kickstarter on the situation:

We work hard to keep Kickstarter a safe and trusted platform. Our Integrity Team actively monitors the system with a range of tools, and acts on reports from our community. We don’t tolerate abuse of our system, and when we identify users who are acting in bad faith, we don’t hesitate to take action.

We’ve suspended this user’s account and are canceling any pledges they’ve made.

Kickstarter has been the source of funding for many awesome games that couldn’t have happened otherwise, but there have also been a number of heartbreaks that come out of it.

Developer 2Awesome Studios’ sci-fi spaceship shoot ’em up Dimension Drive was in the final hours of its Kickstarter campaign when it received a last-minute donation of €7000, only to have the hero backer back-out after the deadline for funding had passed.

We’ve just been informed by Kickstarter that the 7K euro pledge was fraudulent. Somebody played with our dreams. Sorry for the confussion :(

@Vlakmaker Yes, some * (don’t want to say person) played with our dreams.

Many developers and backers have reached out to express their condolences, and to support 2Awesome and their game.

the part that frustrates is how fun that game actually looks, @2AwesomeStudio, I’d encourage you to re-up that kickstarter. I’d like to pay. — Mike Bithell (@mikeBithell) May 13, 2015

If an extension happens I’ll personally pledge $1K and be nostalgic while eating duck noodles for a full month once again.

The team behind the game, 2Awesome Studios, is composed of David Jimenez and Alejandro Santiago, two independent developers that bonded over a “[shared] passion about video game development.” They were in the midst of an “End of Kickstarter” Twitch stream when the donation was funded and then defunded. In the Twitch VOD below, you can note that at about an hour and seven minutes in, the backing in question is confirmed; and at about four hours and three minutes in, the backing is pulled with 30 minutes left in the campaign.

We’ve reached out to both the developer and Kickstarter at this time for comment, and we’ll bring you more updates as this situation unfolds.