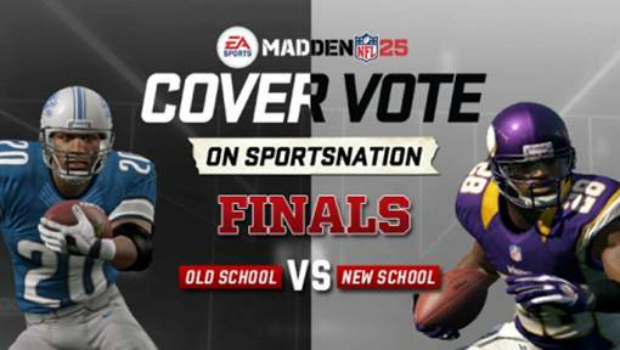 It’s come down to the ultimate running back showdown in Madden NFL 25’s Cover Vote, as Barry Sanders and Adrian Peterson have clinched their spot in the finals and move to one step away from Madden immortalization, according to EA Sports.  Fans are invited to cast their votes at ESPN.com/MaddenVote through their PC or mobile devices until April 24th, when the winner will be announced live on ESPN’s “Sportsnation”.

The greatest of all time versus the greatest of our time, Barry Sanders and Adrian Peterson represent power, athleticism, drive, and will, a perfect combination for the franchise’s cover representative.  Peterson won handily against fellow rusher Arian Foster, while Sanders had a more competitive matchup with the G.O.A.T. himself, Jerry Rice.  A million votes were cast in this year’s semi-finals, 50,000 more than last year.  Over 38 million votes have been cast throughout the event.