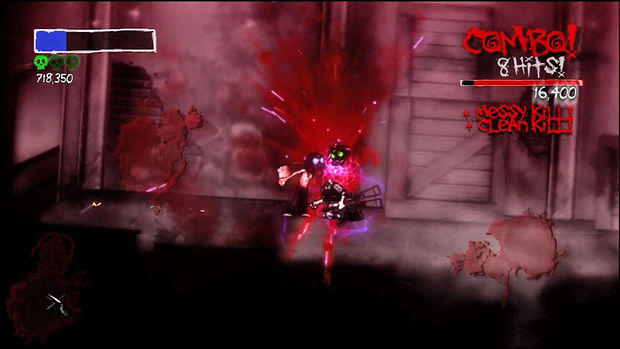 Back in 2009, when I got my XBox 360, one of the first XBox Live Arcade titles I bought was a bloody beat ’em up called The Dishwasher: Dead Samurai.  It was one of the best games in the genre I played, and I’d love to revisit it sometime.  Unfortunately, I can’t.  I had to pawn my 360 in 2011, and neither Dead Samurai nor its sequel The Dishwasher: Vampire Smile are available on PC or steam.

I’m not the only person who is irked by the lack of  dishwashing on my computer, though.  A  lot of people have been clamoring for a PC release, but one Russian gamer went a bit further.  He not only took it upon himself to port the game to PC, he also decided it would be okay for him to release the game–for free–onto the internet.  Now, this is clearly piracy.  There is no way to claim this is anything else.  Barabus–the Russian–took a paid game, cracked it, and released it to the wild free of charge.  That’s essentially the definition of piracy.  What makes this story kind of unique is that the pirate in question spoke out about it.  Posting on the Russian language site Gamedev.ru Barabus stated that his actions were justified:

Piracy – yes, that is bad. On the other hand, we do not steal the game for the Xbox 360, we release it for the PC port.Given that developers ignore the PC platform, about any loss of profit for them is not out of the question. After all, if they wanted to earn money, then the game would be issued on all available platforms. If the game came out on PC officially, then this thread would not exist. [Ed–Translated with Google Translate]

So, his argument is he’s not causing the developers to lose money, because it The Dishwasher series isn’t available on PC anyways.  Barabas could have contacted Ska Studios, who develop the Dishwasher, and offered it to them…but instead he released it.  The worst part? the PC port was already in the works.  No,seriously!  According to James Silva, founder of Ska Studios, the developers, they’d been in talks with Microsoft to create a PC port for  the last week:

Porting Vampire Smile to PC as an enhanced Director’s Cut has been something I’ve been wanting to do since launch (I was calling it Georgelucasing until Michelle made me stop), and we had actually broached the subject with Microsoft last Friday, almost a week before this happened.  Nothing’s set in stone, but we got the go ahead to make a pre-announcement: we’ll be working with Microsoft to bring our stuff to PC.

The lesson here, kids?  Don’t release things for free on the internet claiming you aren’t doing harm, I guess.  Also, I don’t think I have to say this, but don’t download the pirated version (yes, I deployed the dreaded italics+bold+underline for that).  Just remember: waiting for the official release will make killing vampires all the sweeter.