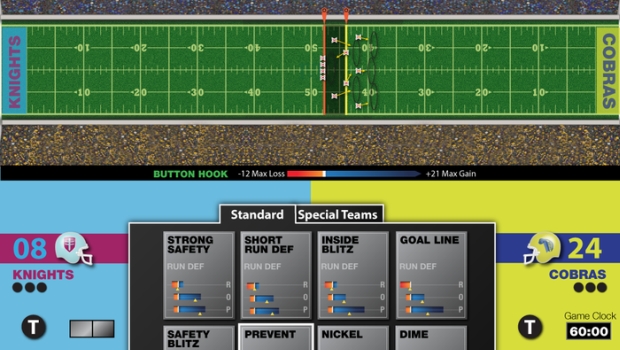 While some of us might remember playing the old vibrating football game a long time ago, it wasn’t a very good game. In fact, few board games have been released to simulate the game of football. However, 1st & Goal from R&R Games does a great job simulating the game experience. However, there are times when I know I would like to play the game but don’t have someone else to play with. R&R Games is trying to resolve that issue with a new Kickstarter to develop 1st & Goal Digital.

For the last several months, we’ve been working to create a digital version of our popular 1st & Goal football board game. It’s coming along great, and we just unveiled the game on Kickstarter.

This is a project that’s near and dear to our hearts because it’ll allow players to experience all the fun and excitement of the board game with whole new ways to play, whether it’s solo against computer opponents or challenging friends to a cross-platform multi-player game on iOS, Android, PC, and Mac. Check it out: http://kck.st/1kraHFl

They are really trying to release it on every platform they can, and there are plenty of reward levels for every budget. If you want to play a football game on the move then be sure to support their Kickstarter, and check out the board game version too if you haven’t already.