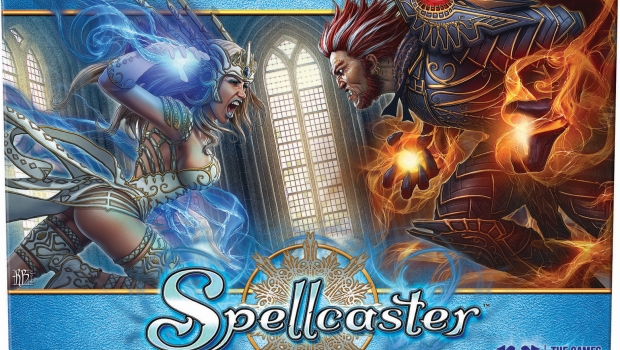 While GenCon and Origins are the premier board game conventions in the US, European eyes are focused on Essen, which is going on this week.  R&R Games has announced that they have released two new games at the convention.

R&R Games, Inc., a leading manufacturer of family board games, party games and strategy games, announces the debut of two new strategy games – Spike™ and Spellcaster™, which will be unveiled at The International Spieltage Essen game fair on October 16-19, 2014.

Spike is a rail-building board game designed for 2-4 players that can be learned in under 10 minutes. Players are the owners of rail companies who are competing to build the biggest and best rail network. There are multiple strategy paths for winning as players compete to expand their rail networks, modernize their trains, transport the most goods, and amass wealth on their way to become ‘King of the Rails’. Ages 14 and up; playing time 60 minutes. MSRP $49.95

Spellcaster is an easy-to-play card game that pits 2-4 Mages in a duel of supremacy as they battle it out in the ultimate test of magical combat. Players exhaust their opponent’s energies or collect enough Sorcery Sapphires to overpower them. Sixty different spells are included from 4 fields of study: Combat, Conjuring, Healing and Sorcery. Cast one or more spells each turn to overcome your opponent and become the Grand Master Mage. Ages 14 and up; playing time 20-30 minutes. MSRP $19.95

Both games will be available at specialty and hobby game stores in late 2014.

Spike and Spellcaster round out R&R Games’ new line-up of games for 2014, which includes their new party games Guess the Mess, Strike a Pose and Hearts of AttrAction.

While some games released in Essen never make it to these shores, it’s great to see that both of these games will be available late this year.  Be sure to be on the lookout for these.