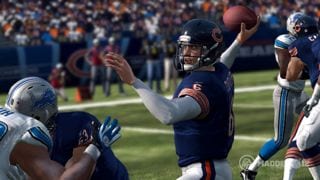 EA is letting fans decide who will appear on the cover of Madden NFL 13. There are 16 players who are still in the running to be on the cover of the next Madden game. A new round of voting starts every week, and the winning athlete will be unveiled on ESPN on April 25.

Here’s the breakdown of Round 2:

Athletes might not be as excited about this as the fans who logged 4.3 million votes this week. Many believe that appearing on the cover of Madden is unlucky, and many players who have been on the cover have gone onto have seasons filled with injury and decline. Last years cover-featured player, Peyton Hillis had multiple injuries which kept him out of numerous games. He commented that, “There’s a few things that happened this year that made me believe in curses.”

Whether you’re a fan hoping to see your favorite player on the cover, or an athlete trying to avoid the curse, you can vote in Round 2 on ESPN.com.