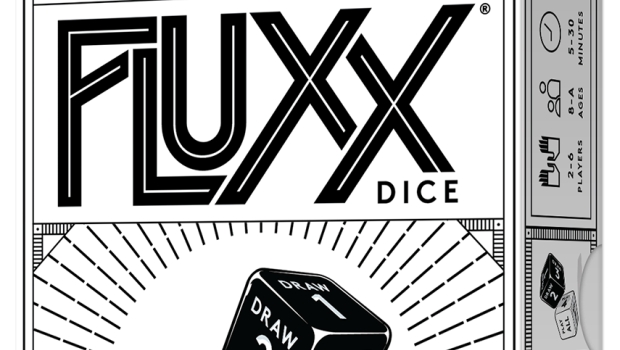 Fluxx is a game of constant change.  If you don’t like a rule, you can change it with the play of a card.  Of course, that means that others can play rules that affect the number of cards you draw, can keep in your hand, and play.  Well, now those rules change more frequently with the latest expansion announced from Looney Labs, Fluxx Dice.

Today Looney Labs announced Fluxx Dice, a new expansion that can be added to any Fluxx deck.

Fluxx Dice takes the place of the traditional “Draw One, Play One” rules in the many versions of FLuxx. Instead of following the basic rules, at each turn players roll the draw and play dice and follow the new rules set by their roll! The expansion set includes two dice and five cards.

There are currently over a dozen versions of Fluxx, including Star Fluxx and Zombie Fluxx and more on the way with Batman Fluxx and Adventure Time Fluxx set to arrive this summer. Fluxx is designed for 2 to 6 players, ages 8 and older and can take 5 minutes to 30 minutes to play. All Fluxx decks include Goal cards, New Rules, Actions and Keepers. Some versions also include Creeper cards, Surprises and Ungoals. No matter the version, Fluxx Dice can be added to any Fluxx card game.

Fluxx Dice is expected to be available from retailers worldwide August 28th at the retail price of $12. For more information, you can visit the Looney Labs website at: www.looneylabs.com/fluxxdice.

If you thought Fluxx was chaotic before, I bet Fluxx Dice makes it even more so.  It’s too bad we have to wait until August to take a look.  At least it can be used with any Fluxx deck and the price is right.