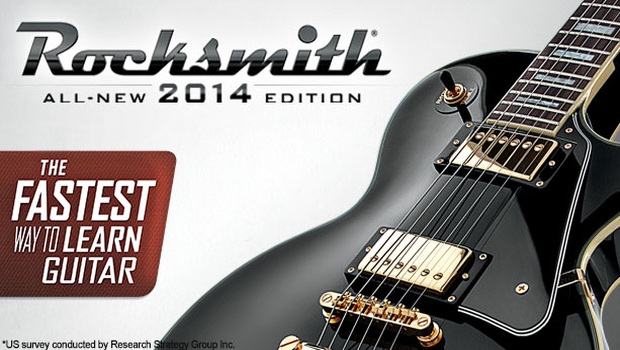 Unless you are legally blind, you’ve noticed that we’ve got a bit of a Rocksmith 2014 blowout.  My review of the game as a novice, and Matt’s review of the game as someone more experienced are the two largest banners on the site. That’d be because, as of this morning, Rocksmith 2014 has shipped to shelves.  Ubisoft San Francisco claims that this product is “the fastest way to learn guitar”.  Is that true?  You’ll have to check out my review to find out! Here’s a bit from the authors themselves:

Exclusively in Rocksmith 2014 Edition is the revolutionary Session Mode, a new technology developed in San Francisco that allows up to two users to play guitar alongside a virtual band that follows their every lead in real-time. Players choose the style of music and from over 70 instruments they’d like to play with, and on-screen prompts help the player learn how to improvise and jam live with a band.

Core to the Rocksmith learning experience is the new Instant Riff Repeater which lets players choose the difficulty, speed and section of each track they play, helping them focus on the particular sections that they struggle with the most. Players are now in full control of their learning pace and can master every part of the songs they want to learn.

The game also features an import system to play all 52 of the original Rocksmith tracks as they inherit all of the new features of the 2014 product.  Don’t sit here and read about it though – check out those reviews as they both feature video coverage of the game in motion. Seeing is believing.