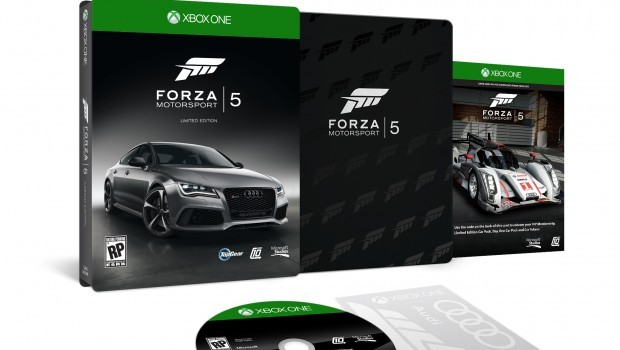 As much as I like the idea behind Gran Turismo’s almost fetishistic obsession with automobile perfection, I’ve personally been taken with Forza Motorsport’s own spin on the racing genre. The ability to make the game as arcade-y or as sim-y as you’d like really helps ease players into the difficulty of actually racing a car — moreso than just plopping you in a Volkswagen Golf and cutting you loose. With Forza Motorsport 5, and by extention, the Xbox One, looming on the horizon, it makes sense that Microsoft has announced a limited edition that will entice the digital car enthusiast in all of us.

Folks who pre-order the $79.99 limited edition will receive a special Steelbook case, a decal sheet, ten dollars worth of in game currency, as well as VIP membership, granting exclusive benefits like double XP, multiplayer events and five exclusive VIP cars. Also included are five additional, limited edition cars that are exclusive to the limited edition copy of the game.

Also available for those who don’t want to shell out the extra $20 is a Day One edition that includes three extra cars from Ford, Audi, and Lamborghini. Limited edition purchasers will also receive these cars.

Say what you will about Xbox One, Forza Motorsport’s always been a solid racing series since day one, and I look forward to checking it out when the Xbox One launches this holiday. Check out the full list of included goodies below:

VIPs will also have access to the “Forza Motorsport 5” VIP Car Pack, featuring five amazing cars only available to VIP members, including:

Day One Car Pack – This three-car pack features amazing cars from Lamborghini, Audi, and Ford; each with a Day One-themed livery and custom tuning package created by the experts at Turn 10. The Day One Car Pack includes the following cars*:

The Day One edition of “Forza Motorsport 5” will be available for an estimated retail price $59.99 at launch and is now available for pre-order at participating retailers.