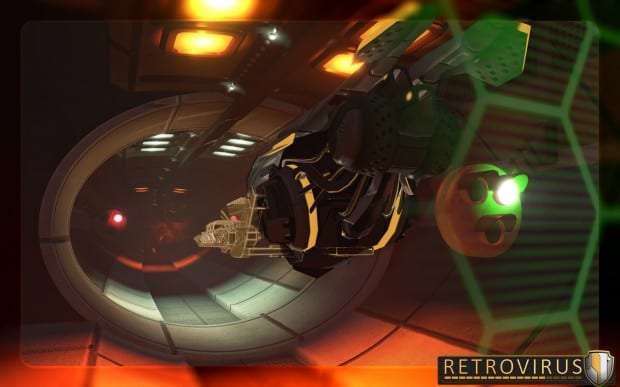 Remember back at the end of June, Victor previewed a Kickstarter game named Retrovirus? Though it managed to get more than a 1000 backers it generated less than half of its goal and never got backed. Truth be told, I tossed money at it because I was intrigued with it’s promise of Descent-like gameplay, and enjoyed playing the demo for Sol Survivor -also from Cadenza Interactive.

What exactly does Retrovirus offer? Take a look:

Discover movement within a six degrees of freedom environment, free from the limits of traditional gravity-based environments.

Delve into a two-layered story, exploring the real-world origins of a malicious computer virus and cleansing the inner workings of the infected system.

Fight battles, complete puzzles and explore an environment built for the free-flying citizens of the computer system.

Customize an antivirus program, focusing on strength, speed or cunning, with weapons and utilities to suit a variety of play styles.

Join with a friend to remove the virus from the infected computer by playing the campaign in co-operative mode.

Compete against other players in a variety of multi-player modes, testing the limits of combat with six degrees of freedom.

Good news then, for those of us who enjoy gravity-free combat as it will be available on January 31 through the Steam, Desura, Gamestop and the Humble storefronts.