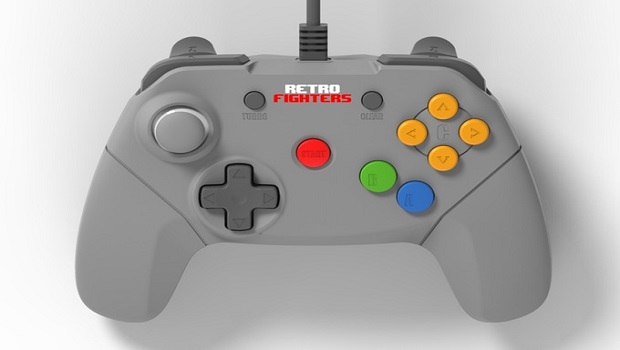 Seattle-based Retro Fighters recently released a Kickstarter for a next gen N64 controller, which will be released in October. As of this writing, the product has already beat its proposed $13,000 goal, with over $70,000 pledged.

The N64 controller Kickstarter is a throwback to the 90s, with a new redesign that changes some of the button layout. According to the product’s Kickstarter:

We changed some things to make the N64 controller more ergonomic and a new modern way to play. First we added a very comfortable modern analog stick. We also made the “C” buttons slightly larger for games that use the “C” buttons for more than just camera angles, i.e. Smash Brothers, etc.

The shape of the controller is very comfortable and fits naturally in both hands with easy access to all the buttons.

We added two “Z” buttons and repositioned them right below the shoulder buttons, this allows to use either your right or left hand to use the “Z” button. A turbo button was added for games where you might need a little extra help. The D-pad features zero “deadzone” or sensitivity/response issues.

Finally, we got rid of the 3 prong N64 controller design, a new modern and comfortable way to play your favorite N64 games!

The controller has a wired length of six feet, and is only compatible with the original N64, though Retro Fighters has stated that the controller will work with other USB adapters should one want to use the controller on another device. Current stretch goals have been exceeded, which will grant additional color options to the product. The controller will retail at $24.99, but backers can pledge $20 to get a controller with shipping included.

The Retro Fighters N64 controller Kickstarter campaign will run until September 8, with an expected shipping date of October of this year. Stay tuned for more news here on Gaming Trend.