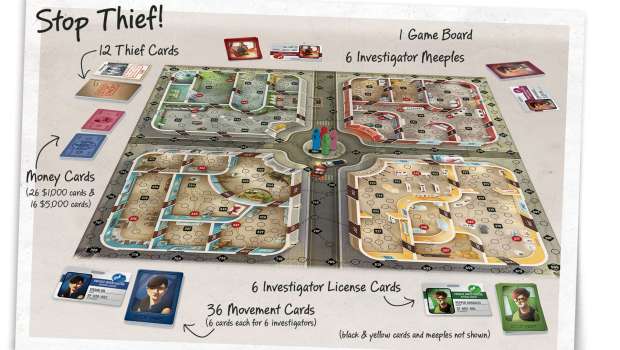 While apps are a recent innovation integrated with board games, the use of electronic devices has been around for a while.  The Dark Tower game was one that was gamers today still reminisce over.  The Omega Strain was able to give players a sense of fear from a rogue AI on a deserted space station.  Growing up I remembered there was a game called Stop Thief that looked interesting because of the sound making device that gave you clues where a thief was.  Restoration Games is committed to bring back some classic games, and Stop Thief is now on Kickstarter.

Today, Restoration Games launched a Kickstarter to publish a restored version of the 1979 board game, Stop Thief. The Kickstarter campaign lasts from March 14, 2017 through April 11th at 10:00 PM. The Kickstarter features three reward tiers. The main tier offers the new game and comes with a pledge of $29. There is also a tier just for U.S.-based brick-and-mortar retailers that includes a carton of games at distribution prices and promotional support from the company. The last tier includes a copy of the game signed both by the game’s original designer, Dr. Robert Doyle, and Restoration Game’s Chief Restoration Officer, Rob Daviau. This edition is limited to 20 copies, numbered, and includes a notarized certificate of authenticity. All tiers also include limited edition promotional cards of Justin Jacobson and Rob Daviau as thieves, usable in the game. The campaign seeks to raise at least $25,000 to fund.

Stop Thief was designed by Dr. Robert Doyle and published by Parker Brothers in 1979. A family-style deduction game, it featured an electronic device that beeped and chirped as players tried to track down an invisible suspect by the sounds they make while escaping. In the new version, Restoration Games has replaced the electronic device with a free companion app, which offers better sound quality and a more dynamic platform for different modes of play. Stretch goals in the campaign will unlock more difficulty levels and play styles, such as a cooperative mode. This makes the game fun for families and experienced gamers alike. The game also features modern game mechanisms, such as asymmetrical movement decks in place of the original roll-and-move and variable thief effects that change the rules. Vibrant new art by Roland Macdonald and John Ariosa complete the restoration. Stop Thief! is for 2 to 4 players, ages 13 and up, and takes 30-45 minutes to play.

While part of me wishes they had included some electronic device for making the sounds, it makes sense to use a companion app.  If you are looking for a modern take on classic games, this looks like a winner.