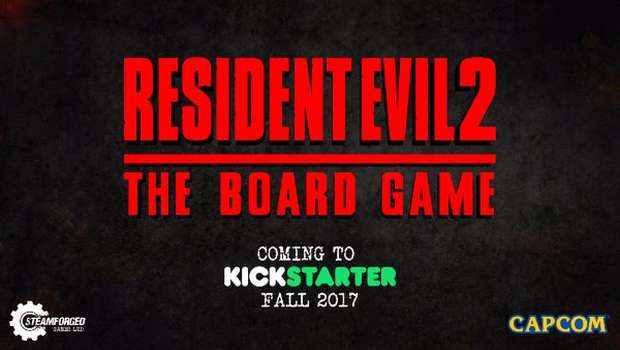 Steamforged Games has come to make a name for themselves from basically nowhere.  They started off creating Guild Ball and making different teams to use with it.  Since then they published Dark Souls: The Board Game.  Now they’ll be creating another game with a video game theme, Resident Evil 2: The Board Game.

Steamforged Games is thrilled to announce an exciting new partnership with Capcom to bring the iconic Resident Evil™ 2 video game to the board gamers of the world.  Building on the success of previous titles including “Guild Ball” and “Dark Souls: The Board Game”, Steamforged Games will be launching this latest game, “Resident Evil™ 2: The Board Game” via Kickstarter in late Autumn 2017.

Steamforged is proud of its proven capability to bring video game IP to life as board games and plans to fully realise the core game experience of the much loved Resident Evil 2 world. “It’s a privilege and an honour to be trusted to bring such an important video game to life as a board game,” said Mat Hart, Creative Director and Co-founder of Steamforged Games. “Resident Evil 2 helped to define its own genre of games and has created a lasting legacy in video game history. Steamforged has several Resident Evil super fans on the team and so we have a deep understanding of what makes RE such a compelling game experience; one that still has legions of fans around the world still playing the game nearly two decades after its release. We’re determined to surprise and delight players new and old with this board game realisation, even the most hardcore of fans!”

Steamforged Games previously broke a number of Kickstarter records with their last game “Dark Souls™: The Board Game” including the highest funded board game ever launched on the KS platform. Steamforged takes immense pride in taking amazing game worlds and lovingly crafting them into high quality board and card games…we specialise in understanding what makes each video game so compelling and then unlocking that experience in the physical game space.

Follow Steamforged Games on Facebook/Twitter/Instagram or subscribe to our newsfeed (http://feeds.feedburner.com/SfgNewsBlog-SteamforgedGames) for all the latest news on this exciting project.

I’m sure we’ll get more details when the Kickstarter campaign shows up within a couple of months.  I have no doubt that Steamforged will be able to capture the feel of Resident Evil 2 for the tabletop.