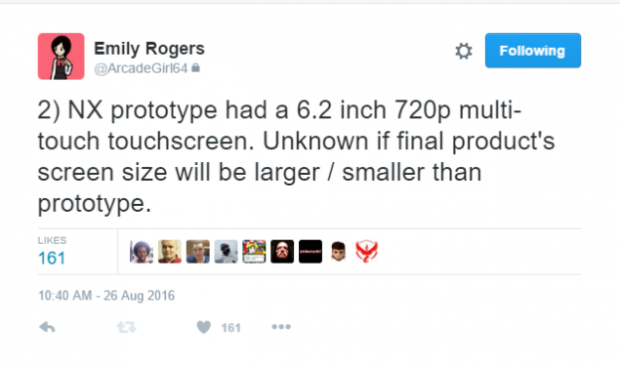 A recent report claims that the development kit of Nintendo’s next console, widely believed to be a handheld device, is roughly the same size as the Wii U Gamepad.

The report from Laura Dale claims that the information comes from a developer “working on an NX title set to launch Holiday 2017.” The post states that, with the controllers attached, the handheld development kit is 28 cm long, 9 cm wide, and is “slightly thicker than the Nintendo 3DS XL when folded” at 2.5 cm. For reference, the Wii U Gamepad is approximately 26 cm long and 13.5 cm wide. With the controllers detached, the console itself measures 20.5 cm in length.

Lastly, the report also claims that the current development kits are “region free, and that those developing software for it have not heard anything about region locking being added before launch.”

Other recent rumors suggest that the NX prototype has a 6 inch screen. According to a tweet from Emily Rogers, the prototype’s screen features multi-touch functionality and 720p resolution. Another tweet from Rogers inundation of information on Saturday reports that the dock station — which has been alleged to be used for connecting the handheld console to a TV — has two USB ports.

The codenamed NX console is set to launch March 2017, though Nintendo has given no official details on its nature or appearance. An incoming Nintendo Direct was recently announced this Friday and will focus on upcoming games for the 3DS.