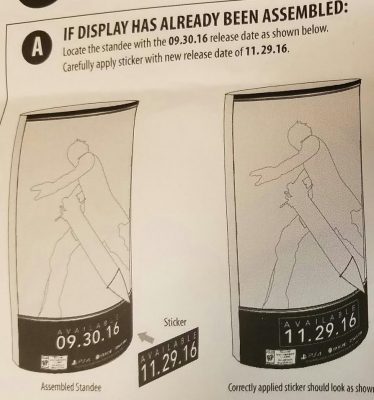 It appears that Final Fantasy XV will be getting delayed to November 29, according to a report from Gamenesia.

According to the report, some GameStop stores have recently received promotional materials for the highly anticipated RPG, appearing with the new release dates. Reported images were additionally provided of alleged instructions on how to apply a sticker with the new November release date over the previously announced September 30 release date. GameStop management and employees were apparently instructed to not set up these promotional materials until after August 14.

Kotaku’s Jason Schreier later corroborated the story, reporting that multiple sources — both related and unrelated to GameStop — had confirmed the delay.

Square Enix announced the game’s September release date back in March at a special event called Uncovered: FFXV. The game was re-revealed back in 2013 as Final Fantasy XV, having been first revealed as Final Fantasy Versus XIII back in 2006.