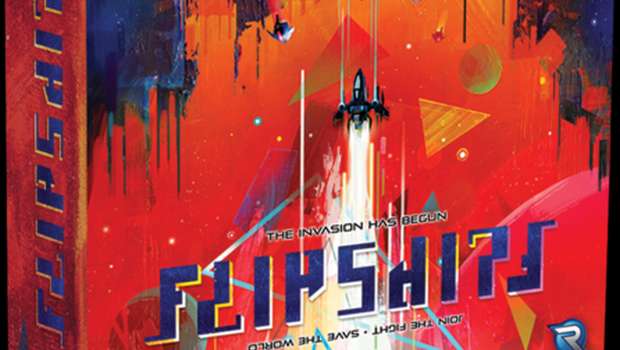 Kane Klenko designed one of the surprise games for me last year, FUSE.  Since then Renegade Game Studios announced Flatline, a game set in the same universe.  Well, it seems like Kane has been really busy, since they’ve announced a new game he’s designed, Flip Ships.

Renegade Game Studios™ is thrilled to announce the upcoming cooperative dexterity game, Flip Ships. Designed by Kane Klenko with art by Kwanchai Moriya, it will release in the summer of 2017. Klenko is the well-loved designer behind FUSE, FLATLINE, and Covert.

We’re launching the ships we have ready, but it isn’t much. Our pilots fight bravely, defending the planet, while we ready the rest of the fleet. Explosions fill the sky, and we’ve taken some hits, but we won’t give up. Will you?

Flip Ships is a cooperative dexterity game where players take on the roles of brave pilots defending their planet from an onslaught of firepower. Flip your ships to take out the encroaching enemies, and to take down the powerful mother ship before it’s too late.

Look for Flip Ships in hobby stores summer 2017. This cooperative dexterity game will have an MSRP of $40, is designed for 1-4 players to enjoy in 30-45 min. per game, and will delight gamers ages 8 and up.

It’s good to see more dexterity games coming out, as they are generally more accessible and just look great on the table.  The summer looks great.