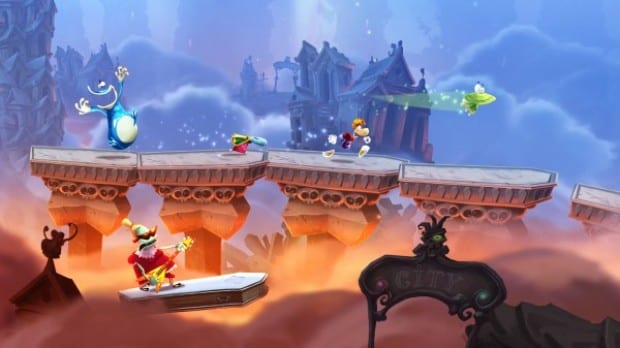 There are two titles that made me want to buy a Wii U on day 1 – New Super Mario Bros. U and Rayman Legends.  In fact, I’d say that Rayman Legends demonstrated the capabilities of the Wii U better than nearly any other title I saw prior to launch!   Well, now you can take it for a spin yourself as Ubisoft has announced that the game demo is now available on the Nintendo eShop.   If you’ve missed our prior coverage, here’s what the game is about:

The classic cast of Rayman, Globox and the Teensies return and are joined by new characters Murphy and Barbara as they embark on a fantasy adventure through a series of legendary worlds with new environments and enemies. Developed exclusively for Wii U, Rayman Legends expands beyond the traditional platforming experience by utilizing the Wii U GamePad in an array of innovative ways to interact with the game. Players can use the Touch Screen on the GamePad to take out enemies, cut ropes to clear a path and move rotating platforms with the gyroscope technology. Rayman Legends features a fresh gameplay adventure to enjoy alone or with friends, and a plethora of creatively themed levels including several musical maps intricately set to popular and original music, a gorgeous underwater haven and a flourishing beanstalk environment.

The music and graphics in this title had everyone laughing when we first saw this game.  Even if platformers aren’t your cup of tea, if you have a Wii U you should check this one out.   It’s the mascot that launched Ubisoft, and it’s good to see him on a brand new platform.   Enjoy the demo launch trailer while you wait for the demo to load!  Look for the game to hit February 26th of 2013.