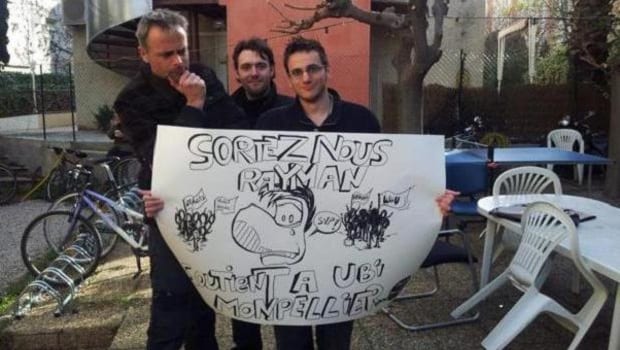 Didn’t I tell you that an exlusive Rayman Legends demo for Wii U wouldn’t be enough to placate fans upset about the game’s delay? Now it’s not just the gamers that are upset; Rayman creator Michel Ancel and other members of the game’s development team are protesting Ubisoft’s decision as well. They have been seen in photographs holding a poster encouraging Ubisoft to “Release Rayman. Support Ubisoft Montpellier.”, according to Eurogamer. Other posters reference the game’s previous release date of February 28, which has been pushed back several months to allow for a simulataneous release on all three major consoles.

While the Rayman Legends delay has been looked at from the gamers’ perspective already, not as much attention has been given to how the devs must feel. Being a game developer isn’t easy work, and working towards a strict deadline often means long hours and sleepless nights. As one Rayman Legends developer put it, “For us, this means we’ve spent six months barely seeing our wives, kids, and friends for nothing because, after all, such a haste wasn’t needed. Believe it, it was a hell to swallow this news.”

I imagine that frustration is what’s got these developers taking to the streets: