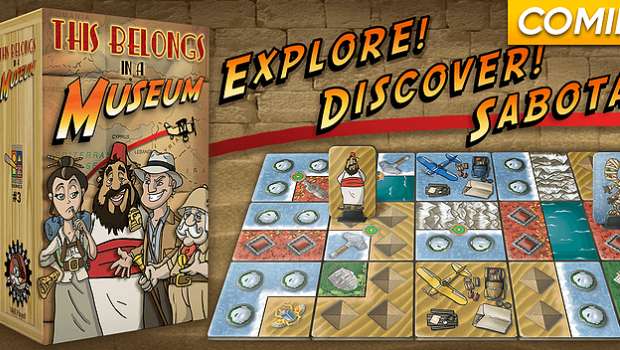 While Carcassonne is one of the games listed often as a gateway game, there aren’t many tile-laying games.  Rather Dashing has created several of them, and their next game isn’t about monsters that go bump in the night.  Instead This Belongs in a Museum has archaeologists competing against each other.

Rather Dashing Games is pleased to announce the expansion of the popular Drawn & Quartered series of tile-laying games this spring with This Belongs in a Museum!

In This Belongs in a Museum, players compete to become the most revered archeologist in the world. Traverse seas and mountains, and use airports to connect dig sites to your base camp with the goal of creating the largest connected section of the board. Collect valuable artifacts for extra victory points and outwit your rival colleagues in this easy-to- learn, strategic tile-laying game.

Explore dig sites, discover artifacts, and sabotage your enemies… but BEWARE THE MUMMIES that can be used to block your path and disrupt your plans.

This Belongs in a Museum is intended for 2 to 4 players, ages 10 and up. Players take turns laying tiles, moving their archeologist or mummy, and adding revealed artifacts to their collections. Play time runs around 20-30 minutes and the game has a suggested retail price of $24.99.

The colorful artwork and theme should be attractive to non-gamers, and Rather Dashing’s other D&Q games are simple to learn with a lot of strategy.  For $25, you get a lot of bang for your buck.