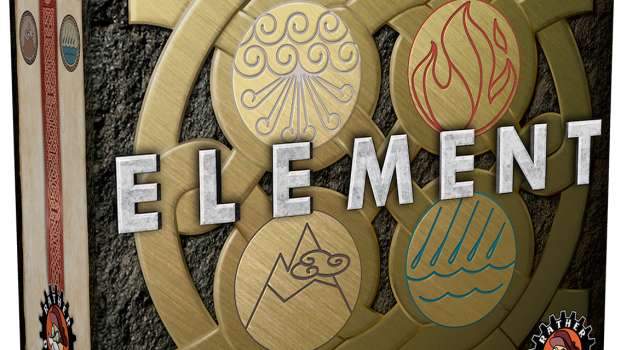 The elements are a part of everyday life.  They make up matter, and you see their influences in all sorts of medium from Fantastic Four to Magic: The Gathering.  Rather Dashing Games is creating their own unique spin with the upcoming abstract game Element.

Master the forces of nature in Element!

Element, the latest release from the creative minds at Rather Dashing Games, is a unique strategy game for 2 to 4 players, ages 14 and up. Players take turns drawing and placing Element stones to encircle their opponents’ Sages (player pieces). Each Element has unique properties used to block an opponent’s movement. Feed walls of flame, move raging rivers, raise impenetrable mountain ranges and even bend wind to your command.

Transform one Element into another with the Rule of Replacement or sacrifice stones to help your Sage avoid capture. Understanding the subtle, diverse and powerful nature of the four Elements is the key to surrounding your opponent and claiming victory.

Interactions between the four Elements and the Sages ensure that the game never plays the same way twice. Element’s rich gaming experience makes it perfect for tournaments and organized play. Boardgame Corner gave Element the first-ever Cornerstone Collection Award prior to its release, praising it as “a great strategy game with some puzzle-like elements. One of those games that keeps you coming back for more, with every experience being unique in some way.”

Rather Dashing creates some great game experiences, though this seems to be the most seriously themed game.  If you are a fan of abstracts, be on the lookout for this game late in the year.