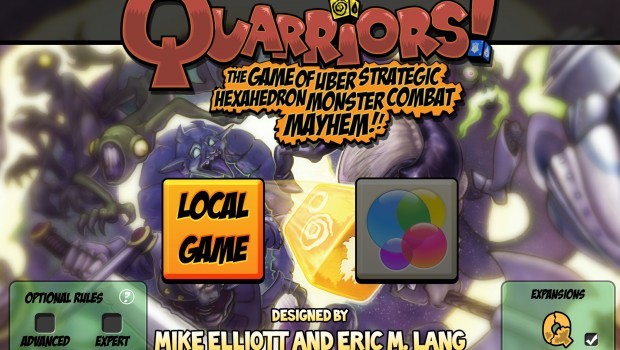 Quarriors is one of my favorite games, so when I heard that the iPad version of Quarriors was coming out, I was very excited.  I was able to download it when it was released and played it a few times.  While I enjoyed it, it felt like a bare bones release.  With an incredibly easy AI, no difficulty levels, and no way to choose which dice groupings to play with, I got bored with it quickly.  Now the first expansion Quarmageddon is coming as an in-app purchase, and it looks like they are fixing a lot of the issues I had with the original release.

WizKids Games is pleased to announce Quarmageddon, the digital expansion to its incredibly popular dice “deck-building” game Quarriors! for iPad®, is now available for just $1.99 as an in-app purchase. Quarmageddon adds 40 additional dice to the base game, along with additional spells and new creatures to expand upon the humor and gameplay of the original.(Note: Quarriors! is required to play Quarmageddon.)

To celebrate the release of Quarmageddon, WizKids Games has made Quarriors! free for a week! That means for just $1.99, you get both Quarriors! (normally $3.99 USD) and Quarmageddon ($1.99 USD). Hurry though, as Quarriors! will return to full price in seven days.

As part of the Quarmageddon release, several gameplay updates have been made to Quarriors!, including new optional rule additions, an expanded tutorial play-through and more.

If you are curious at all about Quarriors and you have an iPad, then be sure to download the iPad version before March 19th while it is free.  I’m looking forward at seeing what improvements they have made to the game and I hope it is a more complete experience.