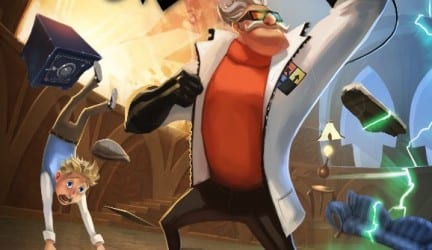 If you didn’t pick up the quirky Quantum Conundrum during the Steam Sale, I think you should probably have your head examined.   If you are in need of said mental help, perhaps this behind-the-scenes on the quirky 4-part “Super Dimensional Quantum Learning’s Problems and Solutions Gametime Spectacular!!” behind us, it’s time to get a peek behind the curtain to see just how it was made.  FLUFFY!

While the four-episode run of “The Super Dimensional Quantum Learning’s Problems and Solutions Gametime Spectacular!!” has come to a dramatic close, there’s still many more dimensional hijinks to expose! The production was a massive feat, taking two days and over 50 crew members, not to mention a large cache of unsuspecting fans in the studio audience. Also, there was a puppet and a baby – both of which provided to be unpredictable, to say the least. Luckily, cameras were rolling to capture all the behind-the-scenes antics.

If you are a fan of puzzle titles, you really owe it to yourself to check this game out.  It’s funny, it’s unique, and best of all it’s dirt cheap!  Enjoy the behind-the-scenes video and then go buy a copy for yourself – you won’t regret it.