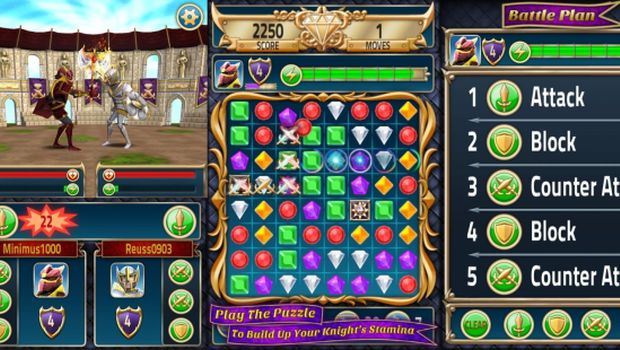 Puzzle Knights, crafted by the fine fingers of some folk who have worked on the Uncharted and Medal of Honor franchises, is now available as a free-to-play purchase on the App Store. The CEO of Mojaro (developers of Puzzle Knights) describes their product as a “crazy, wonderful things that can only happen in the indie mobile world.” I don’t know about you guys, but I’m pretty into crazy, wonderful things.

Before battle, players will solve match-three puzzles in both turn limited as well as timed rounds, to power up their stamina resource. They then select which offensive and defensive moves their knight will execute in the upcoming duel to create a battle plan.  Each move costs different amounts of stamina so players will need to carefully plan their strategy.

Battles occur asynchronously so combatants don’t have to wait till their Facebook friends come online to attack them.  The combat history feature also allows players to know who attacked when they were offline, so they know how to challenge for a rematch to take their revenge.

As previously stated, you can download Puzzle Knights for FREE on the App Store. Below is a trailer and some screenshots for your eyes to devour.