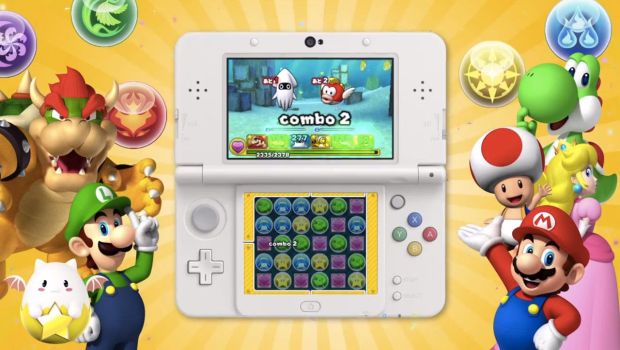 Matching orbs games are all the rage, but what happens when you combine that with the best lineup of classic characters of all time? You get Puzzle & Dragons Super Mario Bros. Edition! Released this morning, there is now a demo on the eShop for Nintendo 3DS for the game. It may come as a shock, but Princess Peach has been kidnapped by Bowser again, and you’ve got two RPG adventure games to rescue her from his clutches.

In Puzzle & Dragons Super Mario Bros. Edition, you get to travel to different worlds as you assemble a team of Mushroom Kingdom baddies, like Goombas or Koopa Troopas, and recruit much-loved Mario™ characters, including Toad™ and Yoshi™! Or in Puzzle & Dragons Z, battle the 5 powerful sky dragons to rebuild the world and customize your team with a plethora of different monsters. Allies gained in both games have the chance to evolve into more advanced forms and learn powerful new skills.

The game is a two-in-one kinda deal, with Puzzle & Dragons Z and Puzzle & Dragons Super Mario Bros. Edition shipping in the same package. Drop by the official mini-site to snap up the demo, as well as to see the game in action.