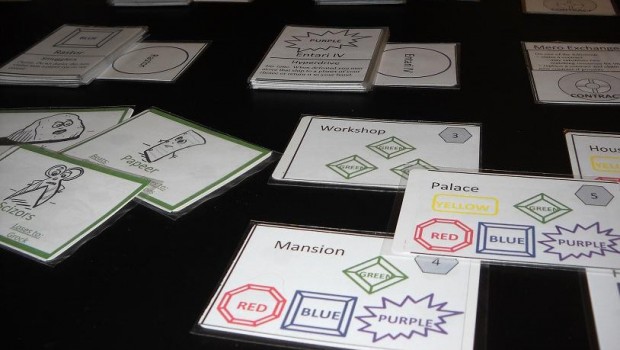 Protospiel is, according to its website, “an annual get-together of amateur and established game designers to test and promote nearly-finished game prototypes.” It was started by game designers Stephen Glenn (Balloon Cup, 1st & Goal), Dominic Crapuchettes (Wits & Wagers, Say Anything), and Mike Petty (Oh, Really) in 2001. Currently David Whitcher (Tahiti, Nitro Dice) runs the event though he is looking for ways to lighten that load as attendance rises each year. This year there were 80 participants, though 16 came as play testers only. Some play testers were friends of designers, but in other cases this was the second member of a two-person design team. Around a third of those 80 people were there for only one day, usually just Saturday.

[singlepic id=15115 w=320 h=240 float=left]One of the things that Protospiel boasts is that several publishers attend looking for their next game or trying to polish one they already have planned to publish. This year these publishers included: Academy Games, Arcane Wonders, Game Salute, Indie Cards & Games, Mayfair Games, Minion Games, and Tasty Minstrel Games. These are mostly medium size publishers, the kind that put out 3 or 4 games per year. Most designers hope to play with a representative from one of these companies or that their game will generate positive buzz and these publishers will approach them.

I had a chance to talk with Joe Hopkins as well as my good friends Ben Eckman and Ben Kanelos about their Protospiel experience. From their thoughts, and my own, I’ve come up with some reasons why Protospiel is good and some reasons it is not so great.

Why Protospiel Is Great

There are some great things about Protospiel. One of the most important is that it gets new eyes on your game. Many designers struggle to get their game played when it is only a prototype. Often they are begging friends or family to play with them. One problem with this is that the same people see your game several times and are biased by past experiences with the game. They don’t see the game how it is at that moment. They can tell, for example, that it is better than the last time they played, but not if it is good. They also don’t know what is confusing or unintuitive about your most recent version since they already learned your game. Protospiel is great because new people get to see your game. They have their own new biases to bring to their feedback, and it can really help round out your game.

The second good thing about Protospiel is that it can help you make good contacts. Making friends is helpful in any industry, and playing games together is a good way to meet other designers. Protospiel is also a chance to meet publishers without having to go up to them at a convention and introduce yourself. Playing games with them, yours or other designers’, is a good ice breaker. It makes things much better when you do have to approach them at future conventions or get-togethers to pitch your game.

The third reason to like Protospiel is that it can help you grow as a developer. In the board game industry we sometimes make a distinction between a designer and developer. A designer comes up with an idea for a board game and works to make it the best he can before pitching it to a publisher. A developer takes a game that a designer has worked on and refines it so that it can be maximally fun and profitable. Game ideas are plentiful, games that work are uncommon, and great games are rare. The key to turning a game idea into a great game is developer skills. If you are planning to pitch to a publisher, then you need to have developed your idea to be as great as you can make it. If you will use crowdfunding, like Kickstarter, to get it published then you are the only developer your game will ever see. Protospiel is a great chance to improve your developer skills by helping develop other people’s games. I played over 10 games there and after each I, and the other players, gave the designer feedback to help him or her improve the game. The ability to see what is not working, and how to fix it, is a critical skill for designer, and Protospiel give you good practice in doing that for other people’s games. This is a skill that you can hopefully turn around and apply to your own game.

If there is one main complaint, it is the reality that Protospiel is not really a great event for getting your game picked up by a publisher. Protospiel does not claim to be such an event, but unofficially it can be seen that way. I had a friend, having heard of the success of some of my other game design group friends, expecting a greater opportunity to approach publishers for the opportunity to show his game to them. Instead the event instructions are clear that you should not approach publishers but let them approach you. Of course some of my friends already know several of the publishers and can approach them casually, then bring up their game in a low-key way. So, before you go, realize Protospiel is a great event for getting your game played and getting good feedback. What it is bad at is giving you a good chance at having your game picked up by a publisher. For that it takes luck and good connections.

One of the other challenges to Protospiel is that when your game gets played three or four times in a weekend there is not much time to tweak and adjust your game based on the first day’s feedback so that it is ready for the second and third day. If you want to add cards, add bits, or changing wording it can be hard to do. You risk playing your game knowing some things need to be fixed but unable to fix them. Some designers showed up with nice high quality card. I showed up with slips of paper in clear card sleeves. I was able to modify my cards between games while they were somewhat stuck with what they sent to the printer a month before the event.

For me, Protospiel was a good event. The other designers gave me some helpful feedback and showed me where the game needed some refinement. I also got a publisher willing to consider publishing my game. For other people it may not have met all of their goals. Some designers discovered that the game they thought was great turned out to have serious problems. Others felt frustrated to not have gotten in front of a publisher or to have not gotten any interest from a publisher. I think Protospiel is a must if you don’t have many other ways to get your game played by people who will tell you the truth about your game’s strengths and weaknesses. If you do have access to that kind of feedback through a local game design group, unpub events, or playtesting events, then Protospiel is only a maybe. Protospiel is not a great path to publication, and so if your game really is ready for publication, Protospiel may not be worth attending.