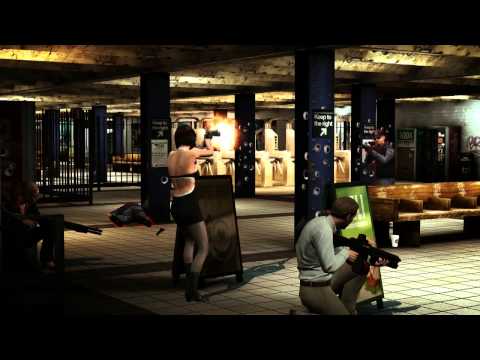 You might not even realize it, but if you play games on your smartphone or tablet, chances are you’ve played a game from DeNA (pronounced “D-N-A”). With over 30 million users and popular titles including “Rage of Bahamut” and “Marvel War of Heroes,” this Japanese native company is now launching a string of innovative titles that they hope will change the way you think of mobile gaming.

I was recently invited to sit down with Barry Dorf from DeNA to play through some of their most exciting releases and talk about what makes them unique. But who needs words? You can check out the trailers or just follow the download links below to play these free games yourself. Pffft, reading.

[youtube=http://www.youtube.com/watch?v=o0qygn6BdMk&feature=youtu.be=620&h=350]
CLICK HERE TO DOWNLOAD “LAWLESS”
Before Barry showed me Lawless, he asked if I’ve ever played Area 51 or Time Crisis, my ears perked up a bit. My brothers and I used to co-op for hours on those games, but I’ve always felt playing shooters on a phone or tablet is traditionally more trouble than fun. Well now there’s Lawless. I was pleasantly surprised to find the tap-to-shoot and release-to-duck mechanics in Lawless actually feel as close to the Time Crisis arcade experience as most any mobile game I’ve played. I’m surprised it hasn’t been done before and kudos to them for cramming it into mobile. FREE TO PLAY, dudes. Free to play.

CLICK HERE TO DOWNLOAD “THE GATE”
Barry tells me when American McGee (as in American McGee’s Alice) first proposed The Gate he was simply describing it as a card-battle game. Instinctively Barry was reluctant to proceed, knowing DeNA is hoping to branch out from card-battle gaming. But he decided to hear American McGee out and now he’s very glad that he did. After a quick look at this dark take on RPG/RTS, Barry realized calling The Gate a card battle game is just American McGee’s way of being modest. “Some people are calling it Pokemon in Hell.” said Barry as he showed me the gameplay. Personally, I Just think it’s the closest thing to Diablo I’ve ever seen on tablet or phone, which is awesome.

It’s always a pleasure to talk games with people who are as excited about them as I am and it’s even better when that person is one of the guys making these games available. Before our meeting, I had never heard of DeNA. (I had to look it up on Wikipedia). Outside of Japan, where 1 in 3 people are already users, there isn’t much talk about them. This might not be the case for long. With new titles like Flutter, Money Run, and now today’s launch of Lawless and The Gate, things are really heating up. And according to Barry, the best is still yet to come…