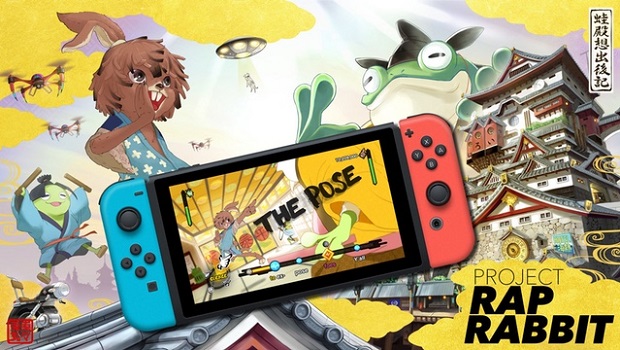 In a post released on the Project Rap Rabbit Kickstarter today, the team announced that the upcoming rhythm game will include a lower stretch goal for a Nintendo Switch version of the game as well as a cheaper digital tier available for the whole campaign. The game’s Kickstarter aims to raise £855,000 (around $1.1 million) by June 19 and will be released for PlayStation 4 and PC in August 2018.

Project Rap Rabbit takes place in 16th century Japan, where the world is getting hostile as people object to the growing diversification of their homelands. Rabbit protagonist Toto-Maru aims to change the public opinion, who is able to harness the special power of force through rap. With his sidekick Otama-Maru, he aims for world peace and global unification through the power of music. While gameplay is reminiscent of Parappa the Rapper, players will use variable rap phrases rather than a static phrase in order to score points, which will have dynamic bonuses based on self-expression of the phrase.

While the game will be released on PlayStation 4 and PC if it gets funded, Project Rap Rabbit will also have a stretch goal for a Nintendo Switch version, which translates to roughly $1.5 million. When asked about development goals, the team said:

In addition, there will be a cheaper digital tier for the duration of the campaign, which includes a digital copy of the game as well as a shout-out for £20 (roughly $25). This is cheaper than the white-label digital tier that was previously available at £30 (Roughly $39).

If funded, Project Rap Rabbit will be released in August 2018 for PlayStation 4 and PC. The Kickstarter for the game will be completed on June 19. Stay tuned for more news on Gaming Trend.