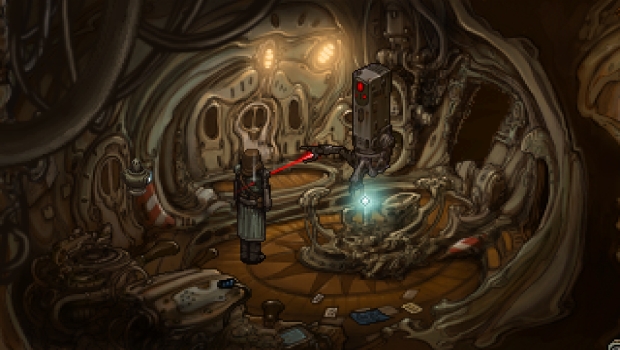 I’m a sucker for two things, and then they are combined it just makes me even happier.  I’m speaking specifically about cyberpunk and adventure games.   The team at Wormwood Studios and Wadjet Eye Games have released a game called Primordia as part of the pay-what-you-want pricing in the IndieRoyale’s latest bundle.  The art style very much reminds me of “I Have No Mouth And I Must Scream” and that’s high praise from me.  Here’s a nibble on the game before we get to the video:

“Fallen” is a free graphic novella set in the Primordia universe. For those who haven’t played Primordia, it serves as a spoiler-free introduction to its setting, themes, and depth. For fans who have finished the game already, “Fallen” sheds light on some of the mysteries alluded to during the adventure and reveals a bit of what has happened in the world after Horatio’s journey concluded. (Finally, for those who played Primordia and objected to the game’s snarky sidekick, “Fallen” presents the same melancholy world stripped of any light-hearted banter!)

We’ve got a pdf entitled “Awake” that serves as the first of a 3-part prequel story called “Fallen”.  The aforementioned video is the Audiobook version, but we’ve also got an illustrated PDF if you are inclined to consume it that way.   Look here for a review very soon.  In the mean time, enjoy Part 1 of Fallen.