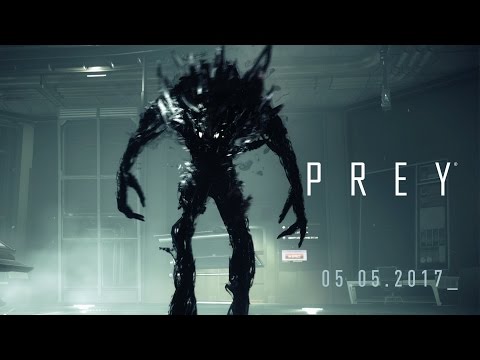 Prey will be released worldwide on May 5, 2017 for PS4, Xbox One, and PC, Bethesda Softworks announced today.

The announcement was made in a new gameplay trailer. Like in other trailers for the game, Prey’s protagonist Morgan Lu can be heard — and this time, seen — greeting himself in what seems to be a holographic recording. As has been revealed in previous trailers and lore-focused videos, Morgan is part of an experiment which involves human-enhancing ‘Neuromods’ based on the shadowy ‘Typhon’ alien threat. These neuromods give Morgan supernatural abilities — like possessing coffee cups, machine-gun turrets, and other inanimate objects.

There are also guns in Prey — lots and lots of guns.

The pre-order bonus consists of Morgan Yu’s family heirloom Margrave shotgun and tools to fight threats aboard Talos I including: three Neuromods players can spend to acquire new abilities, two Medkits, a Fabrication plan to create the Shotgun and Ammo, a starter kit for building tools and weapons, and a unique upgrade to help players preserve their limited resources.

If you’re hoping to read the reviews for Prey before purchasing the game, you will most likely have to wait until after May 5. Last year, Bethesda Softworks announced that it does not plan on providing outlets like Gaming Trend with review copies of their games any earlier than the day before launch. Readers may recall that our reviews for Bethesda-published 2016 games like DOOM and Dishonored 2 went up well after each game’s respective release date.