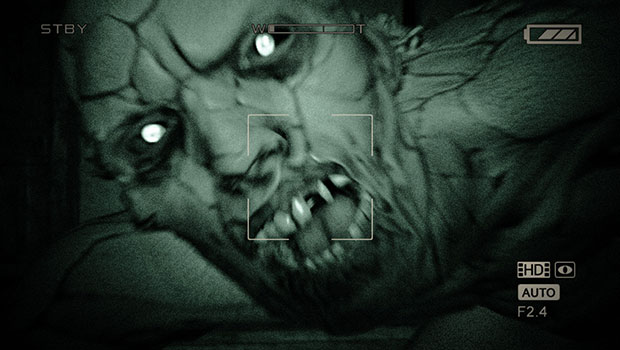 The  next few weeks are going to be awesome for fans of survival horror.  Not only did Amnesia: A Machine for Pigs get an official release date of September 10, but now it’s cousin Outlast will be launching only a few days prior!  Not only that, but fans of the genre can get a hefty discount if they want to pre-order their copy early.  Red Barrels is a new company, but in speaking with studio head David Chateauneuf, I’m fairly confident it’s going to turn out well.  Don’t believe me?  If you’re heading to PAX you can see for yourself!

Outlast has received widespread critical acclaim from critics and fans alike since its October reveal and appearances this year at PAX East and E3. Red Barrels will also be showing a new hands-on demo at this year’s PAX Prime in Seattle, where Outlast will continue to test players’ limits by pushing the boundaries of survival horror.  Those who want to learn more about the survival horror genre won’t want to miss the PAX Prime panel “Are you Afraid? A Guide to Survival Horror,” featuring Outlast developer David Chateauneuf. The panel will take place on Sunday, September 1,  2013 from 10:30AM – 11:30AM in the Wolfman Theatre. For more details on the panel, please visit http://prime.paxsite.com/schedule/panel/are-you-afraid-a-guide-to-survival-horror.

I usually don’t advocate pre-ordering, because you never know if the game will actually be good when it launches.  But from everything I’ve heard about Outlast, the lineage of the developers, and the influences it’s drawn from Frictional’s Amnesia…I think this one might be worth it.  We’ll find out soon enough!