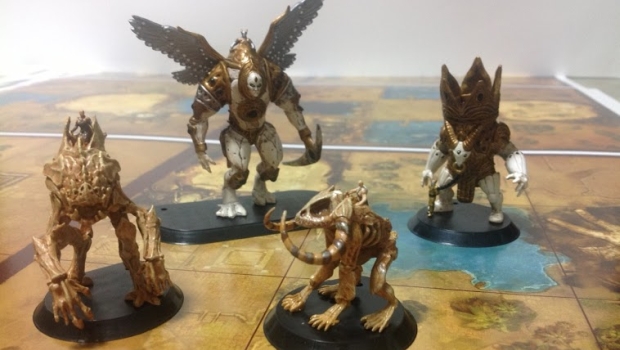 It’s not uncommon to see board game translations available on tablets and phones.  In fact, they have proven popular sellers, and most have the ability to play with friends.  However, we haven’t seen a true integration of board games and tablets come out.  Golem Arcana looks like the first game to truly integrate the two, and it is available today.

INDIANAPOLIS, GENCON INDY (August 13, 2014) —Golem Arcana, the highly anticipated digitally-enhanced miniatures board game from Harebrained Schemes, is now available at retail stores nationwide, and the accompanying free mobile app can be downloaded for Android smartphones and tablets from Google Play and for iPhone and iPads from the App Store.  Five additional expansion sets are also available. Consumers may purchase the base game and expansion sets at select retail shops and at  golemarcana.com later this fall.

Golem Arcana is a point-based army building game that blends the physical fun of tabletop gaming with the power of digital technology. It seamlessly connects a smartphone or tablet to the game’s figures, board, and cards via a Bluetooth-powered stylus designed specifically for tabletop gaming. Simply tap any of the game pieces with the stylus to send information to the app, or tap the board to make a move.

The story for Golem Arcana begins after the meteoric rise and fall of the Great Khan. In the ensuing chaos, conquered tribes and clans rise up to reclaim their sovereignty, and neighboring empires mobilize to reclaim lost territory and honor, as the heirs of the Khan battle each other for control of the Gudanna Dominion.

In Golem Arcana, players assemble armies looking for the best combination of attributes and special actions that will allow them to unleash havoc on the enemy.  Each player fields an army consisting of Golems, Knights (sorcerers who “pilot” the Golems), Ancient Ones (powerful gods that might intervene on the army’s behalf) and Relics (powerful magical artifacts that can be carried and deployed by Golems).

The Base SetThe Golem Arcana base set is priced at SRP $79.99 and includes six modular terrain tiles, a TDI (Tabletop Digital Interface) stylus, two ten-sided dice, two control cards, a quick-start instruction and lore book, and six pre-painted, large-scale Golem miniatures. The free mobile app comes pre-loaded with more than 80 digital characters, with many more soon to be available for sale. ExpansionsSeveral expansions are available to enhance a player’s strategic options and new expansions will be added regularly starting in September. Players can create new armies and add new tactical options with an expanded selection of Golems and Relic cards. Expansion sets with additional figures and relic cards are available for $34.99 each and a set of six double-sided game boards is available for $24.99. The four expansion sets now available include:

It looks like there is a ton of gaming available with just the base set, but all of the expansions should give Golem Arcana even more replayability.  If you are at GenCon, be sure to check out their booth.  Otherwise, take a look for it online or your local gaming store.