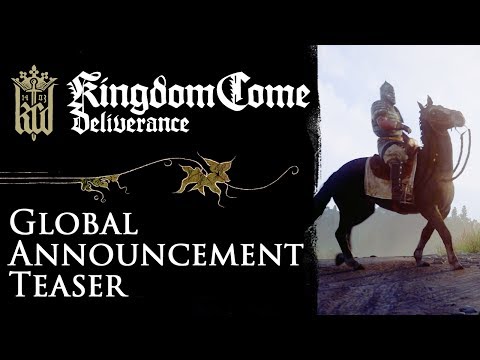 We’ve got an appointment to get some hands-on time with Kingdom Come: Deliverance (Wednesday at 10:30, for those who care), but ahead of that we’ve got our first real look at the Deep Silver / Warhorse Studios collaboration — a teaser trailer showcasing some panoramas of the game’s landscape, villages, castles, and of course, the armies hell-bent on destroying all of those things. What is Kingdom Come: Deliverance, you ask? Well, allow me to tell you!

Kingdom Come: Deliverance is a story-driven open-world RPG that immerses you in an epic adventure in the Holy Roman Empire. Avenge your parents’ death as you battle invading forces, go on game-changing quests, and make influential choices. Explore majestic castles, deep forests, thriving villages and countless other realistic settings in medieval Bohemia.

Real talk here?  That’s not very helpful.   They’ve also dropped this global announcement trailer, and while it’s pretty, that’s not very descriptive either.  Had I not known better, I would have assumed it was a very pretty RTS.  Let me adjust your thinking a little bit before I show you the trailer…

There we go.  Now you are in the right frame of mind.  Let’s watch some trailers!

More about the game will be revealed June 9th, but there’s already a gameplay sequence out in the wild.  What kind of news person would I be if I didn’t share that too?

Kingdom Come: Deliverance will come to PlayStation 4, Xbox One, Linux, Mac, and PC some time in 2017.