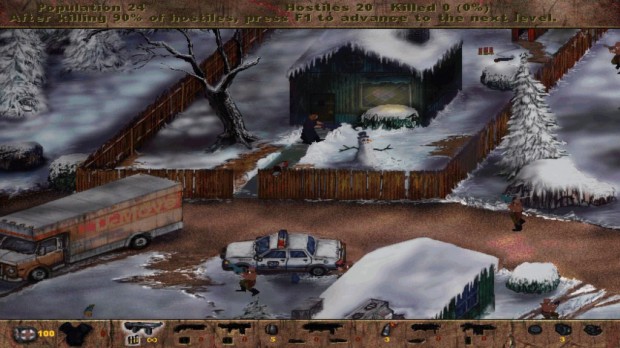 If you’ve ever delved into the more tasteless side of PC gaming, you’re probably familiar with a title dedicated tastelessly to mass shootings that came out in 1997. Of course, I’m talking about Postal, a game created by developer Running with Scissors, and it’s now available on Steam. Did I mention Sen. Joe Lieberman condemned this game in particular as an indicator that our country was going down the drain?

Not that I think this particular man who plays games with people’s lives for a living is correct in his pretentious statements regarding video games. I think we can all agree he’s a doddering old fool, like most politicians, and they should primarily keep out of the violent games debate, as there is no proven link between playing such games and acting out in real life, and in reality, such an assumption is ludicrous. But who am I to judge Congress? They should just stick to watching House of Cards at home in bed, or whatever it is they do when they want to kick back. Leave games to gamers, for Pong’s sake!

At any rate, the developers never intended Postal to be anything more than the kind of thing you play after work to burn off a little Steam (okay, they probably wanted it to be a little controversial). Regardless, now you can play it again without having to hunt down that elusive jewel case on Amazon, and all for the low, low price of $6.99, discounted down to $6.29 for its release, which will end March 29th. Not only will you receive the full, original game in all its glory, but you’ll get the “Special Delivery” expansion (you should listen to this song while you play, obviously) that’ll have you fire-bombing your way through dozens of public arenas. Fun fact: Uwe Boll, the infamous director of The Human Centipede, a cinematic landmark / travesty, has already purchased the filmic rights to the whole gruesome series.

I honestly don’t mean to editorialize; I’ve never played any of the games in the series, but I’ve got to say I’m curious. If Steam is re-releasing it, you know they weighed the decision heavily, and it seems clear that Postal‘s cult-hit status had a great deal to do with the go-ahead. There’s no difference between watching a violent movie and enjoying a violent video game, so why should we be shy about playing Postal? Steam is as good a moral compass as any, I say. If Steam were a babysitter, I would trust him with my kids. Honestly, if the big-wigs deem that the amount of art and creativity that Running with Scissors put into this release warrants a walk down memory lane, then they must have a point. Come on – how many months and years did the developers put in to get this thing on the market? They deserve our support, and if I continue drinking my wife’s piña coladas tonight, I’m probably going to buy it later. Check out all the details here, and make your decision on whether to buy this game that had a heavy hand in developing the sand-box genre, and probably had more than a little to do with how Rockstar games shaped up over the past fifteen years that followed Postal’s original release.