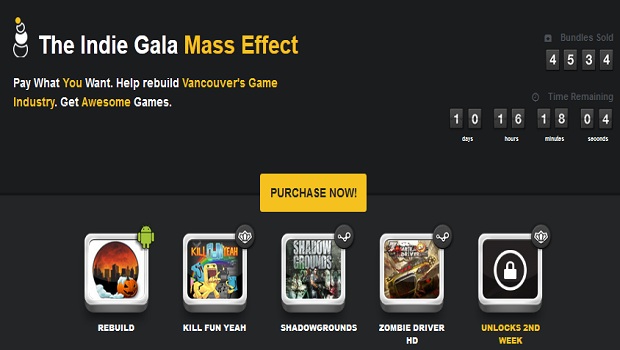 Indie bundle deals have become almost ubiquitous in the world of PC gaming now, so when a new one pops up we generally know what to expect; a selection of game downloads offered for a “pay what you want” price, with the proceeds being spilt between the game developers, charities, and the group offering the bundle. The latest Indie Gala bundle, however, has some of its funds going towards an unexpected cause: the campaign of an aspiring politician from Vancouver. From the Indie Gala page:

Last year, gaming entrepreneur Matt Toner decided to help save the legendary Vancouver game industry… by running for politics. He’s one of us, and now he is one short step away from establishing change for the better. Revenue raised by this bundle will be used to support his campaign and directly rebuild the Vancouver indie scene.

A central campaign issue for Toner is his desire to keep games, tech, and film companies from leaving Vancouver to make their products elsewhere and Indie Gala hopes the collaboration will “help save the legendary Vancouver game industry” that Toner himself worked in. Even so, the association has led some to question the ethics of mixing gaming deals with politics. Let us know what you think in the comments.