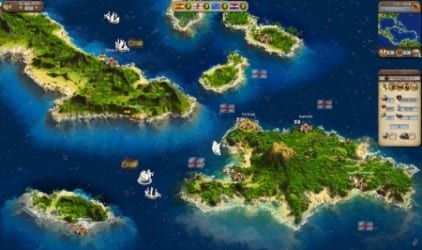 Earlier this year, Kalypso announced the third entry in the Port Royale series of economic simulation games. Port Royale 3 now has an official website to keep fans updated as the launch approaches. The game will challenge players to choose one of two paths: the adventurer, who focuses on piracy, conquering, and building a strong empire, or the trader, who seeks fame and wealth through managing trade routes,  developing cities, and increasing productivity. Alternatively, players can have the best of both worlds in Freeplay mode.

In Port Royale 3: Pirates and Merchants, players will embark upon an epic adventure through the Caribbean during the turbulent 17th century where the naval powers of Spain, England, France and the Netherlands all fight for supremacy in the colonies. Players take on the role of a young captain trying to build his fortune and reputation in the new world colonies.

In addition to single player campaign and freeplay modes, the developers have also announced the inclusion of several multiplayer gameplay types allowing players to compete in the realms of economics and conquest. Port Royale 3 will be released for PC, PS3, and 360 on September 4, 2012. For more information about the game, including screenshots and trailers, visit the official Port Royale 3 website here.