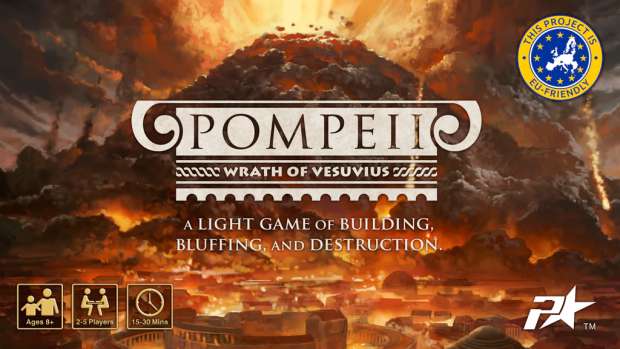 Kickstarter has allowed games with unique ideas to be published.  Sometimes they work, and sometimes they don’t.  Punch-It Entertainment is coming out with a game that includes bluffing, building, and…tile-laying?  The game is called Pompeii: Wrath of Vesuvius.

Punch-It Entertainment is excited to announce the launch of Pompeii: Wrath of Vesuvius, a lightweight board game for 2-5 players that plays in 15-45 minutes. Designed by Jay Little, X-Wing Miniatures, Edge of Empire, Blood Bowl Team Manager and Co-Designed by Lucas Zerby, and Dylan Shepherd. Pompeii: Wrath of Vesuvius features area control, bluffing, and destruction. Played in two phases, during the Pompeii phase take on the role of a wealthy merchant storing your valuable goods in warehouses throughout the city of Pompeii. Use the value of goods in your warehouse to earn influence and victory points for your house. During the Vesuvius phase play as the volcano and destroy your opponent’s warehouses. Any remaining warehouses score final points, and the victory goes to the family with the most points at the end of the game.

Punch-It Entertainment believes Pompeii: Wrath of Vesuvius offers the perfect blend of strategy and fun that is great for gamers and non-gamers alike. Perfect for the holidays and family game nights, gamers can easily find something to love about Pompeii: Wrath of Vesuvius. Whether it’s the quick play time, the bluffing, or destroying your friend’s warehouses. Pompeii is just downright fun.

The campaign on Kickstarter starts on November 15.  You can find out more information about the game at their web site.