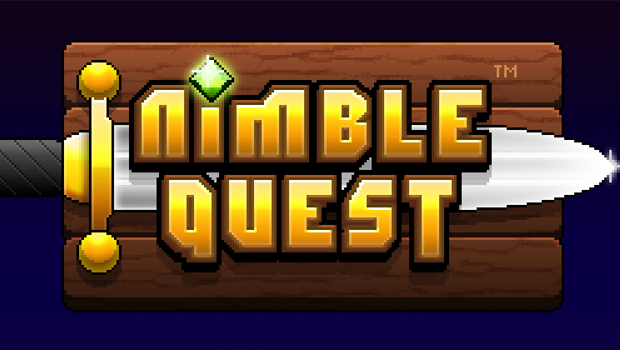 There’s some hot news today for you iOS gaming fans. Nimblebit, the devs behind Tiny Towers and Pocket Planes, have come out with a new game – and this time they’re throwing a bit of a curveball. Instead of another fun but slow-paced simulation game, they’ve given us Nimble Quest – a unique blend of fantasy action-RPG with a heavy helping of Snake style gameplay. I gave this one a shot immediately, and the short version is? This is a damn fun game that primarily fills the ‘fun time-killer’ role, but also manages to spark that ‘just one more round’ bug that so many iOS games try to provoke. It’s also a pretty fresh concept, which isn’t the easiest thing to pull off in the iOS store.

Like I said, this is an upgraded, deeper, flashier version of Snake at heart. You start off with only a single hero unlocked, a knight-looking guy named Ulrich. You’re placed in the game level and swipe up, down, left and right to turn as he ceaselessly walks forward. Once you’re close enough to an enemy, your character will launch an attack – but running headfirst into an enemy, a wall, or one of your own party members will result in instant defeat. Those ‘other party members’ can show up after you kill one of the enemies on the field – just run over their image and they’ll start following along behind you, using their own unique attacks whenever they get close enough. On top of all this, all of your party members have health to worry about – enemies make their own attacks at you, so even if your party doesn’t head-on collide with a fatal barrier, they can still die by being worn down the old fashioned way. Finally, enemies can drop various powerups when they die – gems that you can use to buy unlocks and level up your characters, magnets to pull gems closer to you, and other temporary buffs.[singlepic id=11359 w=320 h=240 float=left]

The game has ‘variety’ going for it – there’s a nice assortment of monsters with their own graphics and attacks to fight, and getting further in the game opens up different classes of characters for you to play as or have a chance to add to your party. You can also unlock up to three ‘levels’ for each of the character classes you acquire, or pick up permanent bonuses to your general gameplay, such as making random buff effects last longer. The level-ups and buff unlocks are where the gems come into play for Nimble Quest, and this in turn is where the cash shop tries to justify its existence: you can spend real money to unlock the gems and coins that Nimble Quest uses as currency. As with the other Nimblebit games, Nimble Quest doesn’t strictly require you to spend actual money on it in order to advance or really enjoy the game, but without it you can count on the game eventually becoming a little more grindy.

There’s also a few other nice features included in this one. It’s integrated with Everyplay, which means each round you play is automatically recorded and can be uploaded and shared via Youtube, Twitter, Facebook or email – pretty convenient for when you have a great round and want to show your friends. Besides this, there’s an Arena mode which lets you join a guild and ‘fight’ on their behalf in a kind of asynchronous multiplayer way – guild member performance is tallied up and added to the guild, so you and your team can compete in global rankings. It costs one of the precious ‘coin’ pieces of currency to play, however – while gems flow like water, coins are a bit harder to come by, and also have alternative uses. The arena is most likely an option for players who have already upgraded every other option in the game.[singlepic id=11360 w=320 h=240 float=right]

Considering it’s a free to play game from one of the better iOS developers out there, there’s really no excuse not to grab this title right away if it sounds at all interesting. For those of you who need a more concrete look at the game, here’s an example of the gameplay in the graveyard level, offered up by yours truly.