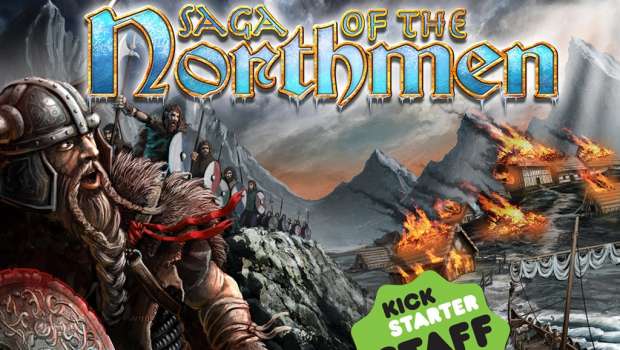 It seems like vikings are slowly becoming the rage.  It isn’t quite to the point of zombies, but the lore and history of the vikings are more commonplace in gaming and pop culture.  Now Minion Games has launched Saga of the Northmen, a fast-playing area control game on Kickstarter with this theme:

Saga of the Northmen is a lightweight Dark Ages wargame of shifting alliances. Players use influence cards to deploy units to try to achieve hidden goals.

Glory awaits intrepid adventurers of all ages in the Saga of the Northmen, a Dark Ages wargame of shifting alliances and area control. Through deft use of influence cards, you do battle with other chieftains to gain control of the 7 major kingdoms of Europe. Forge alliances and then move your armies and fleets to plunder while completing secret objectives unknown to others. Earn the most points from plunder and completed objectives to be crowned Supreme Chieftain!

I have a hard time believing that Saga of the Northmen can really play in 30-40 minutes, but if it does then I think it will be a great way to get people to play this style of game who are turned off by playing Risk growing up.  It seems like a great deal for under $40.  You can get more details on the Kickstarter page.