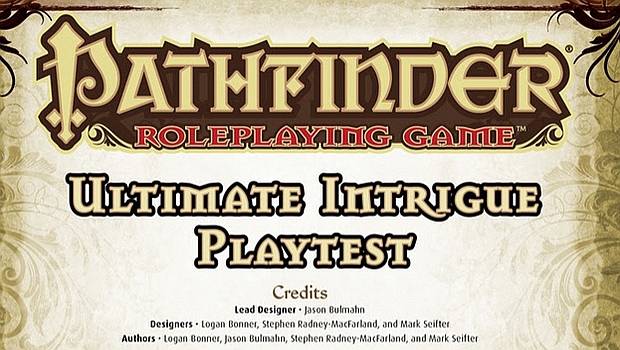 Paizo Inc. continues to build on its strong relationship with fans and consumers, offering the latest supplement to its highly successful roleplaying franchise for playtesting. Playtesting is available for four weeks only.

Set for release in early 2016, the new book, Pathfinder Roleplaying Game: Ultimate Intrigue, introduces the vigilante base class to the game, and players the world over are invited to participate in testing the new rules and provide feedback that will shape the development of the book. For members of Paizo’s worldwide Pathfinder Society organized play campaign, the playtest version of this class opens as a character option, and a special Chronicle Sheet will be available soon that allows players to gain benefits that increase in future utility the more sessions are played, or GMd, with at least one vigilante player at the table.

“The vigilante class is unlike any other that we’ve ever done,” says Jason Bulmahn, Pathfinder RPG lead designer. “It has two entirely separate roles at the table, one of which is focused around social encounters, while the other is great for adventuring, taking on one of many important functions in the group. We hope it will make for an exciting addition to Pathfinder games, and are truly excited to get feedback from our players.”

Ultimate Intrigue, an expansive 256-page hardcover rulebook, delves into the shadowy world of intrigue, giving both the player and GM alike plenty of rules to add to their game. Engage in social combat, dueling with words instead of steel. Participate in a heist, stealing a valuable object or vital piece of information. Curry favor with the local churches, guilds, and royals with a complete influence system. Characters get an edge in social situations with a wide variety of new archetypes, feats, spells, and gear. The new vigilante base class allows players to assume two identities at once, such as a playboy noble by day who becomes an urban avenger by night, or a mild-mannered scholar who assumes the robes of a deadly cult master under the light of the moon.

To participate in the playtest, download the Ultimate Intrigue Playtest document for free from Paizo, then incorporate the new vigilante class into regular Pathfinder games, and provide feedback via the Paizo fourm. The Ultimate Intrigue playtest will remain open through Thursday, July 20, 2015.

As a player in an ongoing Pathfinder campaign, I’m intrigued by this new class. It seems like a good fit for players interested in exploring greater roleplaying depth who would otherwise be limited to the rogue class.